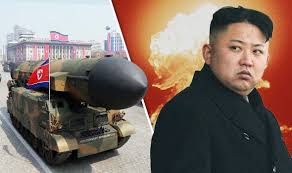 Trump Discuss N. Korea’s Threat: According to the North’s official KCNA news agency, after weeks of warm words and diplomatic backslapping, Pyongyang abruptly threatened to pull out of the planned summit next month because of US demands for “unilateral nuclear abandonment”.

North Korea also cancelled at the last minute a high-level meeting with the South, protesting joint military drills between Seoul and Washington.

In a phone conversation on Sunday, Trump and Moon “exchanged views on various actions taken by North Korea recently”, Moon’s office said in a statement.

The two leaders agreed to “work closely” for the success of the landmark summit in Singapore on June 12, which would be the first meeting between a sitting US President and a North Korean leader.

They are due to meet in Washington on Tuesday: Moon will meet with Donald Trump Tuesday, ahead of the US President’s planned summit with North Korean leader Kim Jong Un in Singapore next month.

That summit has been looking a lot less certain, as Trump appeared to suddenly catch up to widespread skepticism over how willing Kim will be to give up his nuclear arsenal.

At a dramatic summit last month in the De-militarized Zone dividing their two countries, Kim and Moon pledged to pursue nuclear disarmament and a peace treaty.

Pyongyang also raised hopes ahead of the US summit by announcing it will destroy its nuclear testing site next week.

North has spent decades developing its atomic arsenal, culminating last year in its sixth nuclear test, by far its biggest to date and the launch of missiles capable of reaching the US.