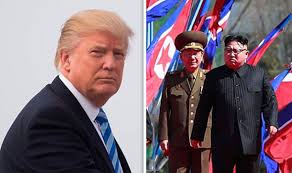 The United States and North Korea were adversaries throughout the Cold War and fought on opposite sides of a dreadful war in the 1950s. They have been engaged in the world’s most dangerous nuclear standoff, with 30,000 US military personnel stationed just over the border in the South. Trump’s strategy has been to incline sanctions, tighten the diplomatic tracks and regularly threaten military force. But now it seems to be melting.

South Korean National Security Advisor, Chung Eui-yong announced the first meeting, by the end of May this year between US President Trump and the North Korean Leader Kim Jong Un. He announced this while standing infront of the White House. In US high stakes nuclear stand off with North Korea this is being considered as a stunning development. This thaw came after a period of extreme tension between Washington and Pyongyang that sounded like the growing groundswell of war.

Trump has welcomed it as a huge progress in the push to convince Pyongyang to end its nuclear weapons program. North Korean leader, Kim Jong Un has talked about denuclearization with the South Korean Representatives and no missile testing by North Korea during this period of time but sanctions will remain until an agreement is reached. “We look forward to the denuclearization of North Korea. In the meantime, all sanctions and maximum pressure must remain.” US Office told.

Last year, Trump scorned Kim by calling him “little rocket man” and Kim returned the favor by calling Trump as “mentally deranged” and a “dotard.” This may be risky for Trump government having no strategic parity with North Korea, but it is carrying historic booms of Richard Nixon’s visit to communist China or Barack Obama´s overture to Cuba both of which offered the hope of better relations.

North Korea has announced that while talks with United States they would suspend missile and nuclear tests while analysts, are critical, saying a US-North Korea summit is a win for Kim.