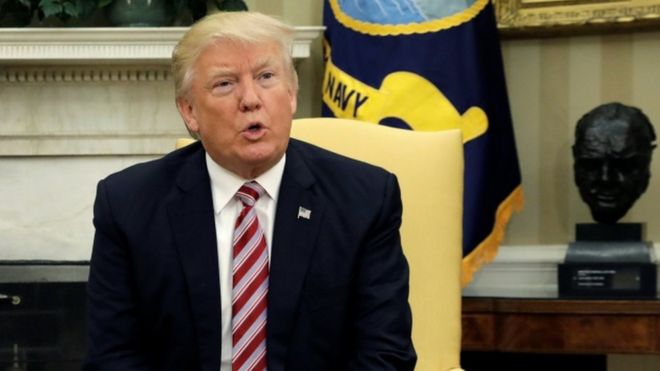 Trump warns sacked FBI chief over media leaks: Donald Trump warned his sacked FBI director not to talk to the press Friday, in a morning Twitter tirade that painted a picture of a president under siege and lashing out.

Capping a week in which Trump faced a slew of criticism for firing the man investigating his campaign’s possible ties to Russia, Trump warned James Comey there could be retribution if he speaks to the press about their private conversations.

“James Comey better hope that there are no ‘tapes’ of our conversations before he starts leaking to the press!” Trump said.

Furious with the news coverage of the White House’s shifting explanations on Comey’s sacking, Trump lashed out, suggesting the media was wrong to expect his spokespeople to be 100 percent accurate.

“As a very active President with lots of things happening, it is not possible for my surrogates to stand at podium with perfect accuracy!” he tweeted.

Trump then went on to suggest scrapping the traditional White House briefings that have existed in some form since the Woodrow Wilson administration almost a century ago.

“Maybe the best thing to do would be to cancel all future ‘press briefings’ and hand out written responses for the sake of accuracy???” Trump suggested.

Again, Trump brought the issue back to Russia, referencing a former head of intelligence’s assertion that Trump was, to his knowledge, not colluding with Moscow.

“When James Clapper himself, and virtually everyone else with knowledge of the witch hunt, says there is no collusion, when does it end?” Trump tweeted.

Trump’s bareknuckle comments immediately fueled fresh comparisons between his administration and that of disgraced president Richard Nixon, who famously recorded his conversations — a fact that sped his downfall during the Watergate scandal.

“Presidents are supposed to have stopped routinely taping visitors without their knowledge when Nixon’s taping system was revealed in 1973,” tweeted the presidential historian Michael Beschloss.

The White House initially asserted that Comey’s dismissal had nothing to do with the Russian investigations, which continue to be an albatross around the neck of Trump’s presidency.

Instead, they said, the president fired Comey on the advice of senior members of the Justice Department, who worried about his handling of a 2016 investigation into Trump’s election rival Hillary Clinton.

But Trump shattered that explanation himself on Thursday when he said he had always intended to fire Comey and that his decision was linked to the ongoing investigation into his campaign’s ties with Russia.

In an interview with NBC on Thursday, Trump also revealed that he had asked Comey on three occasions whether he was personally under investigation.

“I actually asked him, yes. I said, ‘If it’s possible would you let me know, am I under investigation?’ He said, ‘You are not under investigation,’” Trump recounted, repeating an assertion made when the White House announced Comey’s firing Tuesday.

The other two times Trump said he asked Comey whether he was under investigation were in telephone conversations.

“When I decided to just do it, I said to myself, I said you know, this Russia thing with Trump and Russia is a made up story.”

That startling admission fanned suggestions that Trump may be interfering with the investigation and promoted Comey allies to refute Trump’s account of events.

The New York Times reported that Trump pressed Comey for a pledge of loyalty over dinner only a week after his inauguration, according to an account by two associates of the lawman.

Comey, they said, declined to make such a pledge but told Trump he would always give him “honesty.”

US presidents are normally at pains to avoid any suggestion of interference or even commenting on ongoing investigations.

Noted legal scholar Laurence Tribe told AFP that if Comey did indeed answer Trump’s question, it would violate Department of Justice rules and “would be unthinkably unethical and unprofessional in this situation.”

Trump also said that at the dinner, he and Comey discussed whether the US top cop would stay in his role and continue his 10-year term.

Asking such a question “would come close to bribery… or at least obstruction of justice, which Comey would’ve had to be an idiot to fall for by offering the assurance sought,” Tribe said.