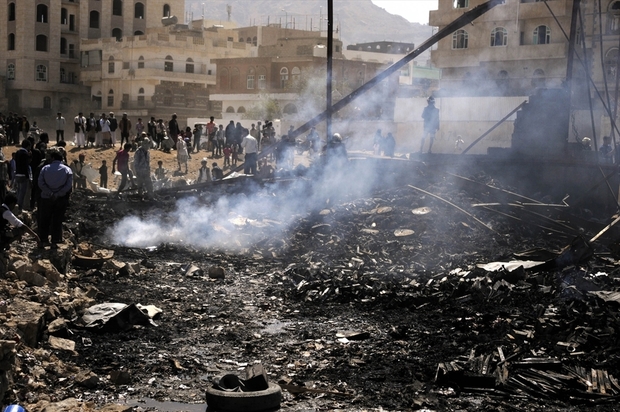 According to The Syrian Observatory for Human Rights 42 people, including 11 children, died on Monday, 15th May 2017, when warplanes bombed Al-Bukamal, located near the border with Iraq. According to the IS news agency “Amaq” the death toll has been put at 25 and the news agency also released video of the strike.

The coalition had said that they had not targeted any area on Sunday or Monday. However, they alleged that unnamed countries had done so. US army spokesman Col Ryan Dillion whilst talking to the press said “We did not conduct strikes during the time period of alleged civilian casualties.” He further added that the coalition warplanes had only hit oil production facilities more than 50km outside Al-Bukamal on those dates.

According to the estimates given by the coalition in 20,200 air strikes in Syria and Iraq since 2014, 396 civilians had died unintentionally. Human rights groups say that the true figure is higher however. An organisation by the name of Airwars, which tracks allegations of civilian deaths, has put the number between 3,290 and 5,280. The Syrian Observatory which is a UK based monitoring group said that the aircraft was seen approaching from Iraq so it is unlikely that it was Syrian or Russian.

The report suggests that the airplane struck near a residential area and a mosque killing 23 civilians along with 20 IS militants which were gathered in one building. According to activist group, Deir Ezzor, the attack by the warplanes destroyed 15 homes and killed at least 35 civilians. The group claims that the warplanes were Iraqi.

On Tuesday, 16th of May, 2017, UK ministry of Defense said that an RAF reaper had stopped the IS militants from carrying out summary killings in Al-Bukamal on the 9th of May. The report says that the drone’s pilot observed a large crowd gathering of civilians and a van carrying shackled prisoners who were being unloaded by the van. The scenario seemed one of a summary killing.

The militants beside the crowd could not be targeted, so the drone fired a Hellfire missile at two stationed as sentries on a nearby roof, it added. Afterwards, the militants fled the scene and the crowd dispersed.