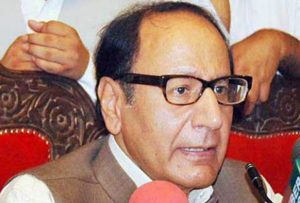 He said that the PML (Q) will not favour of conflict between the Judiciary and the Parliament.