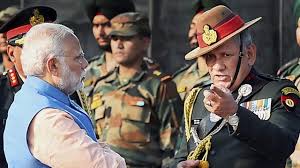 India is disturbing the peace process in South Aisa since long. It’s role to destabilize the region is creating trouble for the establishment of peace not only in Pakistan but also in other South Asian countries.
Indian strikes have hit civilians across LoC near Azad Kashmir. It has been violating the LoC since long. It is reported that it violated the LoC for more than 3000 times since 2016.
The most important rule for foreign diplomatic relations is always to maintain good relations with neighbors because we can make and change friends but we can not change our neighbors. What is happening on the Indian side? Is it a good policy to disturb the peace process in the region? Is India thinking about another war? It should be kept in mind by Indian authorities that they are basically digging a hole for India only.
The independent movement in occupied Jummu and Kashmir has reached its radical peak. The other movements in India for independence are getting warm due to the Indian Policy.
India is continuously violating the Geneva Convention by hitting civilians along the LoC. India is part of almost all international forums but it is a fact that India has always violated international agreements. It never cared for international peace and agreements. In the same way it always violated the United Nations Organization’s resolution regarding the choice of people of Kashmir whether they are with Pakistan or India. We find the same case in the violation of Geneva Convention by India as it is targeting the civilian population near the Loc.
Pakistan, on the other hand, is fighting a war against terrorism as a frontline ally. Unfortunately, the Western world, mainly the United State of America is negating the sacrifices given by Pakistan. The sorrowful matter of the heart is that they are silent on Indian violation of peace in the region. If India is not stopped, it will not only disturb the peace in South Asia but in the rest of the world also.
Indian Violation of Geneva Convention- HumSub.Tv