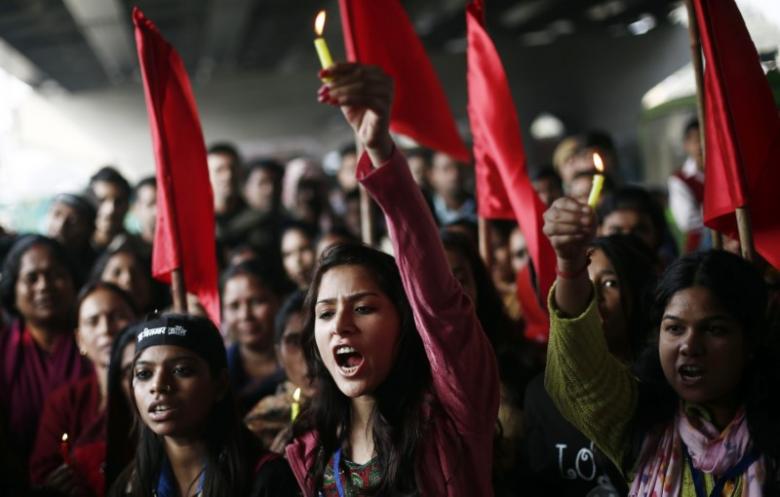 Applause broke out in court among relatives of the victim – whose identity is protected by law – as judges explained the crime met the “rarest of the rare” standard required to justify capital punishment in India. “It’s a barbaric crime and it has shaken the society’s conscience,” Justice R. Banumathi said, as a three-judge Supreme Court panel threw out an appeal on behalf of the defendants.

The five men and a juvenile lured the 23 year old trainee physiotherapist and her male friend on to a bus in New Delhi on December 16th, 2012, before repeatedly raping the woman and beating both with a metal bar and dumping them on a road. The woman died of internal injuries nearly two weeks later in a Singapore hospital. “I am very satisfied. Today I am happy,” the victim’s mother said outside the courthouse. Her father said: “It’s not just a victory for my family, it’s a victory for each and every woman in our country.”

Four of the attackers were sentenced to death 2013 while the fifth hanged himself in prison during the original seven-month trial. That verdict was upheld by the Delhi High Court in 2014. The four – gym instructor Vinay Sharma, bus cleaner Akshay Kumar Thakur, fruit-seller Pawan Gupta and unemployed Mukesh Singh – then appealed to the Supreme Court. The defendants were not in court on Friday.

The crime sparked large-scale protests and led thousands of women across India to break their silence over sexual violence that often goes unreported. It also shone a spotlight on what women’s groups call a rape epidemic in the country. In 2015, police registered more than 34,000 rape complaints and 84,000 women filed sexual harassment cases, according to the National Crime Records Bureau.

Authorities have stiffened penalties against sex crimes, introduced fast-track trials in rape cases and made stalking a crime. A.P. Singh, a lawyer representing three of the condemned men, said justice had not been done. He vowed to file a review petition to the chief justice of the Supreme Court. The last recourse of the convicts, all of whom are now in their twenties, would be able to seek clemency from President Pranab Mukherjee.

The sixth defendant, a minor accused of pulling out part of the woman’s intestines with his own hand, was sent to a reform home for three years and has since been released.

Despite the toughening of the laws, debate continues over whether they serve as a sufficient deterrent. On average, 50 crimes against women are registered every day by police in Delhi, including at least four cases of rape, according to a senior official in the federal home ministry.

Opponents of capital punishment argue that public and media pressure swayed the judges in the Delhi gang rape case to impose the death penalty, adding to the hundreds already waiting on death row in India. “There are many cases of rape and murder where death sentences were not ordered. It can’t be subjective,” said Seema Misra, a lawyer who has worked extensively on cases involving women.

More than 400 people are known to have been sentenced to death in India, according to a tally by Amnesty International, with 136 condemned in 2016.

The last rapist to be executed in India was Dhananjoy Chatterjee, on August 14th, 2004. He was hung at Alipore Central Jail in West Bengal, on his 42nd birthday, for raping and murdering a teenage girl.