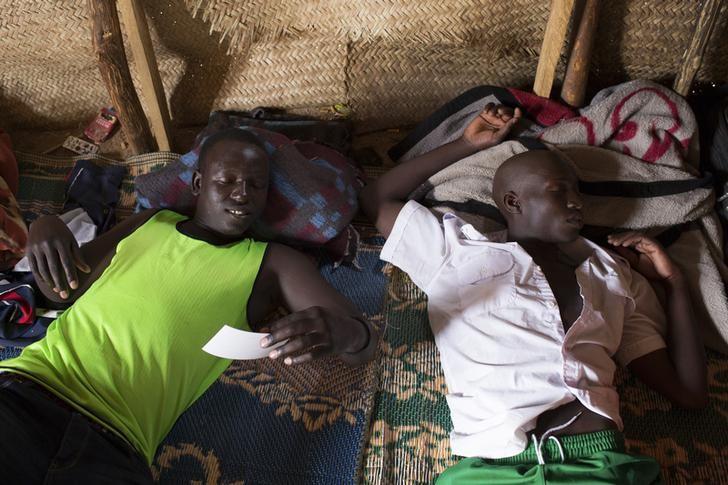 There, he says he was kidnapped and beaten by a smuggling gang to elicit a ransom from his family and frequently forced to work for no pay during his seven months in the town.

Today, Hydara is back in his Gambian home town of Brikama, where he has no job and sleeps on a mattress on the floor of a sparse shack.

Of the more than 300,000 migrants that crossed the desert and sea to Europe last year, thousands did not survive the treacherous journey and thousands more end up stranded in Libya or back in their countries, often without the small amounts of money they gathered to make their initial trip.

For most of these returnees, the journey is thwarted in Libya, a country that – six years after the fall of Muammar Gaddafi – is still a lawless state despite ongoing attempts by Western countries to stabilize and unify it under a single government.

Numerous armed groups compete for land and resources, Islamist militants have a presence in parts of the country while large weapons and people-smuggling networks operate with impunity.

Few places are worse than Sabha, a stop-off on the Saharan trade route for centuries and for most migrants the first town they see after emerging from the desert.

Fighting late last year in the town between rival tribes involved tanks and mortars. Its streets are lined with burnt-out cars. Bullet holes fleck the buildings and residents routinely carry guns. Electricity and medical care are sporadic and there is no functioning police, according to migrants and regional security experts who have recently visited the town.

Interviews with half a dozen Gambian migrants who each spent months in the town in 2016 and 2017 paint a picture of Sabha, one of the last unpoliced parts of the journey where migrants are forced into hard labor, abducted, abused and sold in private deals from one smuggling group to another.

Bubacar Samba, a Gambian migrant who voluntarily returned from Libya, reacts during an interview at his home in Brikama, Gambia April 5, 2017. REUTERS/Luc Gnago

Hydara had hoped Sabha – a rundown provincial capital of 200,000 people, surrounded by date palms and overlooked by a large colonial Italian fort – would offer a place to recuperate and earn money to continue his 4,000-mile journey north to Italy, where he planned to attend school.

One morning in September, he went to Chat Place, a roundabout in central Sabha where migrants wait for odd jobs to make enough for the 500 dinar ($350) ride to the capital Tripoli on the coast.

A day’s work making cement bricks could fetch about 10 dinar, if the employer actually pays up, which they often do not, according to the migrants interviewed. People are often robbed walking there, they said, or forced to take shelter when they hear sniper fire from nearby buildings.

Hydara got into a large black 4×4 truck with three migrants for what the driver said would be a day moving furniture.

“They lock all the doors. They pull a gun threatening us that everyone who is trying to escape will be shot.”

Two local gangsters drove Hydara to a fenced-off house in town. They roped his hands to the ceiling of a tiny room and called his uncle to demand 30,000 Gambian dalasi, the equivalent of $650, for his release. They had agents all over West Africa to receive cash payments, they said.

“They said ‘If you don’t pay, we will kill your nephew’,” Hydara recalled. He was beaten on the back with batons while his uncle listened to the screams on the other end of the line.

A few days later, his uncle paid the money to an agent in Dakar, Senegal, and Hydara was released.

Reuters could not independently verify Hydara’s account. But the other people interviewed said they knew of migrants who had been kidnapped for ransom or sold from one smuggler to another.

Colonel Khaled al-Azhari, the head of the department for countering illegal migration in Libya’s southern region, told Reuters that Libya needed “urgent support” to patrol its borders to stop migrants coming from Niger to the south.

He denied that migrants were beaten or sold by smuggling gangs, or held for ransoms. “The migrants say this because they want to get asylum from European countries,” he said. But he nonetheless added that police were unable to stop powerful smuggling networks with the little resources they have.

Libya, via Niger, is the only viable passage left to Europe for West African migrants after other routes through the Canary Islands, Algeria and Morocco were shut down by increased border patrols in recent years. Nearly 300,000 migrants crossed the desert from Niger to Libya between February and December last year, the International Organization for Migration (IOM) said last month, with the vast majority ending up in Sabha.

“The migrants leave from Niger into a black hole,” Giuseppe Loprete, the IOM’s mission chief in Niger, told Reuters.

Hydara was flown back to Gambia from Tripoli last month by the IOM with 170 other migrants after ending up in a U.N. refugee camp.

In a program mainly funded by European countries, the IOM aims to fly up to 10,000 migrants back to their home countries from Libya this year. It says the voluntary repatriation scheme is meant to offer a way out to those stuck in Libya without money, work, or a means to move on.

Fourteen months after leaving with some fruit, a change of clothes and about $1,000 in cash, he found himself back in his family’s basic home in Brikama in western Gambia.

“The journey was hell, but I never regretted it,” he said. “I just want to get a better job and pursue my education in Europe. I cannot do it here.”