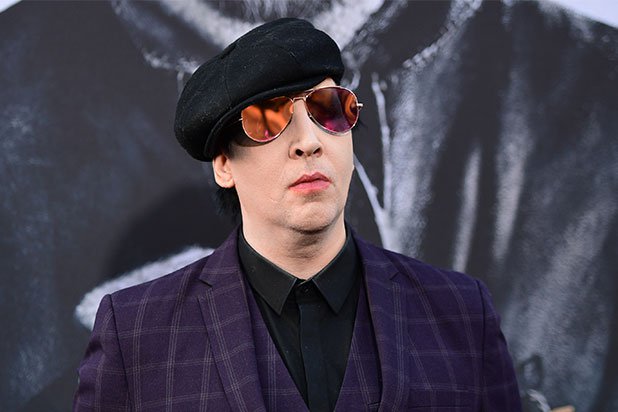 Rock star Marilyn Manson is recuperating at home after a stage accident in which he was crushed by a prop.

The prop – apparently two large guns held together with metal scaffolding – fell as he was performing at New York’s Hammerstein Ballroom.

An eyewitness said Manson lay on stage for up to 15 minutes before he was taken to hospital on a stretcher.

The singer has cancelled nine dates of his US tour after Saturday’s incident.

Eyewitness Anthony Biscardi told that fans at the concert “instantly freaked out”.

“He was performing the song Sweet Dreams,” he said. “Towards the middle of the song it seemed as though he tried climbing onto a prop.

“The first touch of weight on those poles and it came crashing down onto him.”

In videos of the incident posted online, stage crew and band members can be seen lifting the prop off the singer but he does not get back up.

“He was pretty limp, almost as though he was unconscious,” Mr Biscardi said.

Mr Biscardi said a black sheet was put around him until he could be taken off stage, when an announcement was made that the show was cancelled “due to injury”.

In a statement, the star’s publicist said: “Marilyn Manson is being forced to cancel several of his October dates on his forthcoming US tour.

“On Saturday night, the legendary performer suffered an injury on stage towards the end of his set at NYC’s Hammerstein Ballroom causing him to cut the show short.

“He was treated for the injury at a local hospital and will be recuperating at home in Los Angeles.

The 48-year-old artist was three dates into his The Heaven Upside Down Tour. He was due to perform in Boston on Monday night.