Recovery of Rupee Against Dollar: HumSub.TV 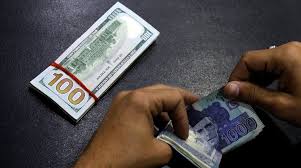 Recovery of Rupee Against Dollar

Recovery of Rupee Against Dollar: The local currency market had a cloudy trading activity last week while the rupee-dollar parity showed a steady trend.

On the inter-bank market, the rupee traded firm against the dollar. There was no pressure on the rupee as dollar supplies were sufficient to meet dollar demand from importers.

In the open market the rupee/dollar equality continued to show a stable trend for the second consecutive week. The rupee commenced week unchanged at Rs118.20 and Rs118.70 and traded flat throughout the week, closing the last trading session at the same level against the dollar.

Traders expect the remittance in coming weeks ahead of Ramazan and Eid-ul-Fitr will further improve dollar liquidity in the open market.

Against euro, the rupee traded firm last week after snapping previous weekend losses. Regaining strength in the week’s opening session, it commenced the week on a positive note, with euro changing hands at Rs.143.00 and Rs.144.50 against the prior weekend’s levels of Rs.143.25 and Rs.144.75.

Trading operation remained suspended on May 1, due to the closure of all banks, financial and commercial centers being Labor Day holiday.

The euro remained depressed against the rupee on Friday, closing the week at Rs140.80 and Rs142.50, its highest level in 6 weeks.

During the week, the euro lost Rs.2.70 on the buying counter and Rs.2.25 on the selling counter after appreciating by 1.4pc against the rupee amid variations in the month of April.