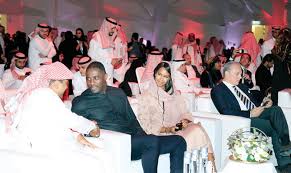 Riyadh Cultural Event Hosts Katie Holmes: Known for its conservative traditions and culture, Saudi Arabia has recently been revamping itself to become a more ‘moderately Islamic country’. With the entertainment industry now flourishing in the Kingdom, famous artists such as Nelly, John Travolta and many others have been visiting the country.

British director and actor Idris Elba is planning to shoot his next film in Saudi Arabia as the country promotes itself as a viable entertainment industry, reported Arab News. Speaking at an event held in Riyadh, Elba was joined by Hollywood star Katie Holmes and former French footballer Thierry Henry.

The event marked the launch of the Kingdom’s $35 billion program that aims to promote cultural, sports and entertainment initiatives.

Addressing the crowd, the 45-year-old actor said, “Saudi Arabia has an awesome opportunity to spread its culture through film-making. It gave me an opportunity to make my film here and it made sense on an economical model. I would definitely be here — why not?”

The London-born star made a name for himself through TV shows such as The Wire and Luther. He also starred in hit films namely Star Trek and Marvel’s Avengers franchises. Elba made his directorial debut with Yardie this year and was also named in 2016 Time magazine’s 100 list of the Most Influential People.

Saudi Comic Con held annually in the country aims to attract the huge amount of comic fans all across the country. Apart from Somerhalder, Wagner Moura from Narcos and Gustaf Skasgard from Vikings also be attended the event.

With the country moving forward at a rapid state, who knows Hollywood might just start filming in Saudi Arabia soon.