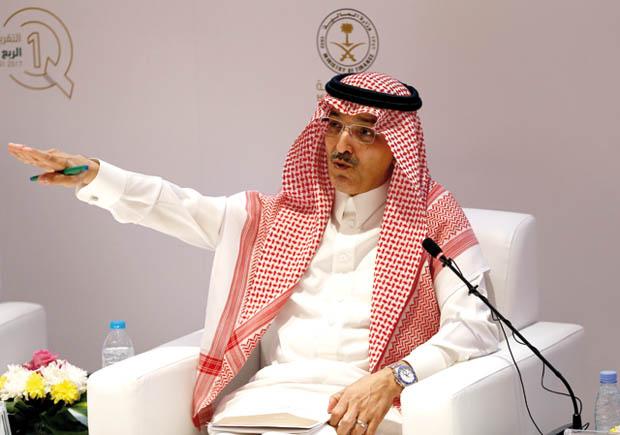 Saudi deficit plunges after cuts, oil revenue surge: Saudi Arabia’s budget deficit dropped by 71 percent in the first quarter of the year, the government said Thursday, after spending cuts and a major rebound in oil revenues.

The world’s top crude exporter has made an aggressive push to diversify its traditionally oil-dependent economy after the drop in global prices since 2014 slashed its revenues. Finance Minister Mohammed al-Jadaan on Thursday said the deficit had dropped to 26 billion Saudi riyals ($6.93 billion) in the first three months of the 2017 fiscal year.

Saudi Arabia’s budget deficit was initially projected at $53 billion for the whole year, after an even bigger deficit last year that prompted subsidy cuts, delays in projects and a temporary government salary freeze.

“This is a very encouraging figure and clearly reflects our aim to achieve a balanced budget in 2020,” Jadaan said.

This is the first time that Saudi Arabia has released budget figures on a quarterly basis, a measure it says is aimed at boosting transparency.

Total revenues for the first quarter were at 144.076 billion riyals ($38.41 billion), an increase of 72 percent from the same quarter last year.

Oil revenues were notably up in the first quarter at 112 billion riyals ($29.86 billion) with a growth rate of 115 percent from the same quarter last year, driven by a hike in crude prices in international markets. Non-oil revenues for the first quarter were reported at 32 billion riyals ($8.53 billion), a one percent increase from the same quarter last year.

The Saudi government last year announced a sweeping “Vision 2030” plan aimed at developing its industrial and investment base and boosting small- and medium-sized businesses in a bid to create more jobs for Saudis and reduce reliance on oil revenue.

The plan also aims to include more women in the workforce in Saudi Arabia, which has some of the world’s tightest restrictions on women. It is the only country where women are not allowed to drive. In September, the state froze salaries and reduced benefits for civil servants — who comprise the bulk of the workforce — as part of a package of austerity measures.  King Salman revoked the measures in a royal decree last month.

High on the diversification agenda is the kingdom’s plan to sell some five percent of state oil giant Aramco to private owners next year.

Saudi Arabia has also announced foreigners would no longer be allowed to work in Saudi Arabia’s numerous shopping malls, in a measure to boost employment of Saudis.

About nine million foreigners worked in the kingdom at the end of 2015, the most recent official figures available.