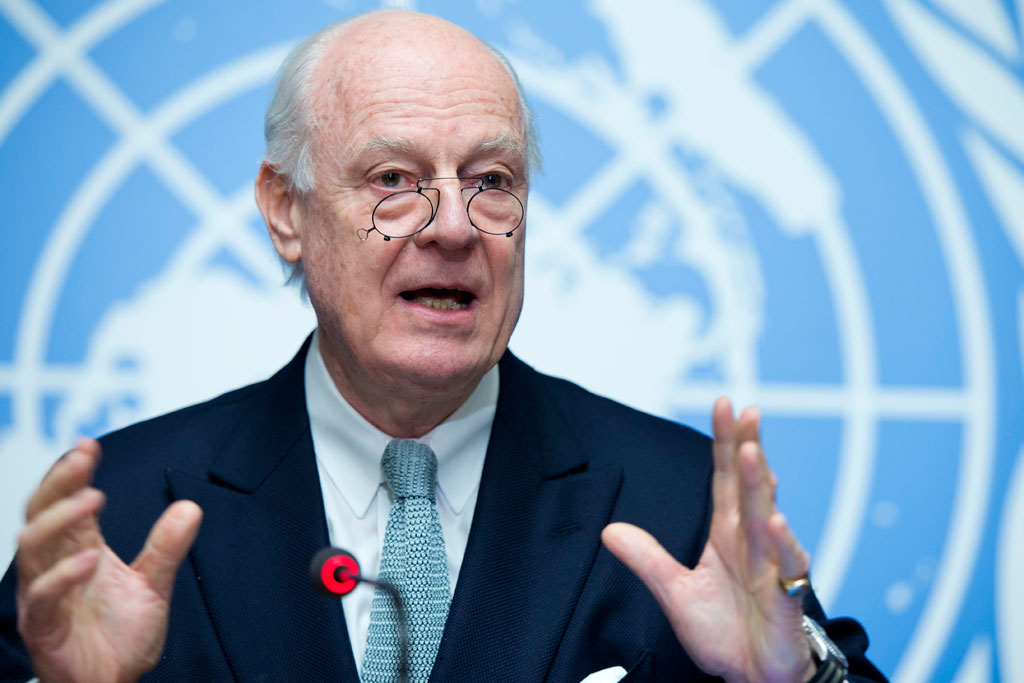 Syrian conflict, peace talks restarted at Geneva: United Nations has started a new round of indirect Syrian peace talks in Geneva. The Syrian President Bashar al-Assad had dismissed the talks as irrelevant. The government and the opposition had agreed to discuss the four “baskets” which are a political transition, new constitution, elections and combating terrorism.

Mr Assad had said that “nothing substantial” will be achieved out of these talks. But UN envoy Staffan de Mistura insists that the government’s 18-strong delegation is in Switzerland “to work“. A political solution to the six-year civil war has been a little progress in the five previous rounds of negotiations. The conflict has so far left more than 300,000 people dead.

On Tuesday morning Mr de Mistura had met with the government’s chief representative, Bashar al-Jaafari, at the UN headquarters for the sixth round of talks. Later, the UN envoy will meet with Nasr al-Hariri and Mohammad Sabra of the main umbrella group, which is representing political and armed opposition factions known as the High Negotiations Committee (HNC).

The Syrian officials from the Syrian government on the other hand have denied accusations that a prison crematorium had been used to hide mass killings of political prisoners. The Syrian government issued a statement which was carried by the Syrian Arab News Agency (Sana). The country’s foreign ministry in the statement had said that the accusations which were made on Monday by the US state department were “a new Hollywood story” and “totally baseless“. The statement also had an anonymous source which accused the US government of making the allegations up, to justify US aggression in Syria.

On Monday Mr de Mistura had told the reporters that the intention was to be “more businesslike, both in our meetings and in the way we hope we can get some progress“. He said that the rooms would be small, the meetings would be more interactive and frequent, and discussions would be focused on particular subjects in an effort to achieve “more movement.” Mr Mistura had also played down last week’s dismissive comments by Syria’s president, who had said that the Geneva talks were “merely a meeting for the media” and had praised the parallel process taking place in Kazakhstan’s capital that has been organised by the government’s allies Russia and Iran, along with key opposition backer Turkey.

On 4 May with the establishment of four “de-escalation” zones which were created in the north-western province of Idlib through the Astana process. It had resulted in the three powers signing a memorandum. “We are working in tandem, in a way… Everybody’s been telling us and we agree that any type of reduction of violence, in this case de-escalation, cannot be sustained unless there is a political horizon in one direction or the other. That is exactly what we are pushing for” Mr de Mistura said.