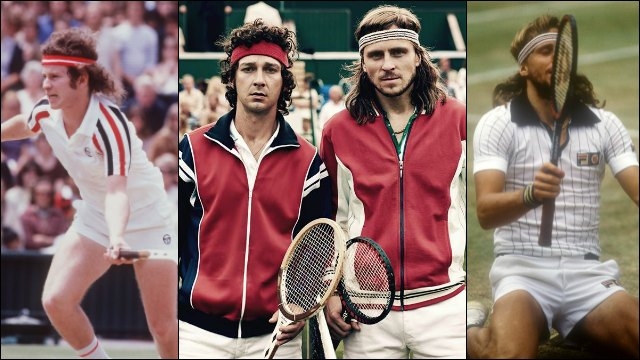 The film tells the story of the famous Wimbledon men’s final of 1980, and stars Shia LaBeouf and Sverrir Gudnason as McEnroe and Borg respectively.

“They were kind of the first rock star tennis players,” he told.

“They had a swagger about them. Borg was almost like a Beatle. Everywhere he went, people were obsessed with him.

“Then you had McEnroe, who was more of a hot-headed fiery tennis player, didn’t always play by the rules.”

Borg/McEnroe is one of several sports-based films attracting attention this year.

Scott said: “Tennis is a sport where there’s so much that comes with the way that you go about your game.”

“Being respectful to your opponent, treating a loss the same as a victory… so to have Borg and McEnroe competing against each other, it was the perfect rivalry really.

“What’s amazing is that after their rivalry they became best friends. Borg was the best man at McEnroe’s wedding.”

Here’s what some of the stars said about the film:

Shia LeBeouf: “I think McEnroe was a tactician, he added something different to the game. He used rage as a tactic to throw people off, he manufactured his intensity to hype himself up. In that way he was an artist, it was very thought-through. [Playing McEnroe] was quite cathartic.

Sverrir Gudnason: Borg is the biggest athlete Sweden has ever had. For me, the interesting part of the film is the psychology. To get there, my goal was to play Bjorn as true as I could, and the script gave me the rest.

Director Janus Metz: “These were two legendary icons, and their famous rivalry in 1980 was something that made time stand still. This film had to be more than a biopic, more than a tennis movie, something universal that transcended the sport. When I read the script I found a beautiful story with deep existential questions.”

Scott said preparing for the role involved spending more time in the park and, unfortunately, less time in the pub.

“About six weeks before we started filming, I got a call saying ‘You need to make sure that you’re training every day, going running and not drinking beer’,” the 28-year-old explained.

“Because if you’re playing a tennis player you need to look as lean as possible, so that was probably the hardest part of everything, going running, not drinking beer and making sure I was watching my diet.”

Scott is no debutant, but described Borg/McEnroe as “the most high profile thing I’ve done, by far”.

“I did a film called Bridgend, based loosely on the Bridgend suicides [a spate of suicides involving young people in Wales].

“That got a bit of press, but it’s nothing on the scale of Borg/McEnroe, so this is the first real big thing that I’ve done.

“So to be walking on a red carpet is a childhood dream. I’m trying to just stay on my feet, not get too swept up by it all.”

The film, which is due to be released in the UK on 22 September, is certainly turning heads at Toronto, although its first reviews were mixed.