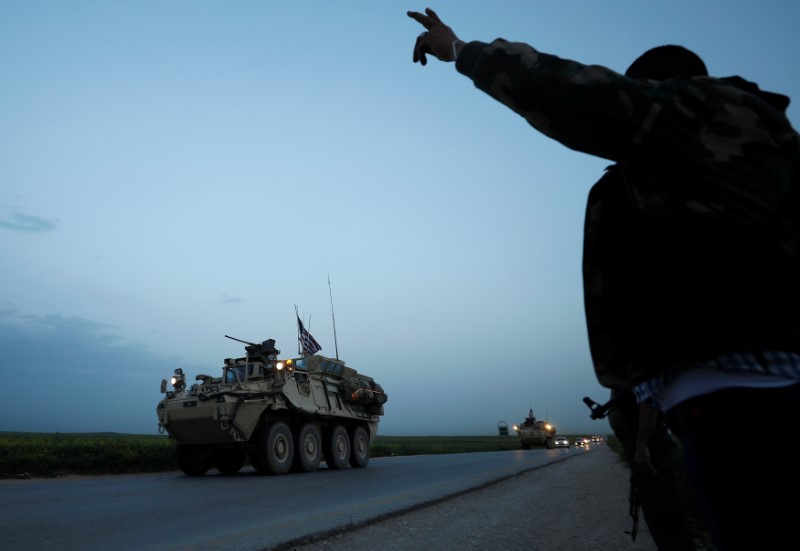 Ankara views the Kurdish YPG militia, fighting within a larger U.S.-backed coalition, as the Syrian extension of the Kurdish PKK militant group, which has fought an insurgency in southeastern Turkey since 1984.

There was no immediate reaction from Turkey, whose president, Tayyip Erdogan, is expected to meet Trump in Washington next week.

The Pentagon immediately sought to stress that it saw arming the Kurdish forces “as necessary to ensure a clear victory” in Raqqa, Islamic State’s de facto capital in Syria and a hub for planning the group’s attacks against the West.

“We are keenly aware of the security concerns of our coalition partner Turkey,” Pentagon spokeswoman Dana White said in a statement as she traveled in Lithuania with defense secretary Jim Mattis.

“We want to reassure the people and government of Turkey that the U.S. is committed to preventing additional security risks and protecting our NATO ally,” White said.

The United States has long directly supplied arms to the Arab components of the so-called Syrian Democratic Forces, which include YPG fighters. White said Washington would still prioritize supplying those Arab fighters within the SDF.

One U.S. official, speaking on condition of anonymity, said the equipment for the Kurdish fighters could include small arms, ammunition, machine guns, armored vehicles and engineering equipment.

Equipment provided to the SDF would be limited, specific to a mission and provided “incrementally as objectives are reached” White said.

The U.S. alliance with Turkey has proven decisive in the battle against Islamic State in Syria, providing the coalition with access to Turkey’s Incirlik air base to wage strikes against the militants, officials say.

Mattis, speaking before the announcement to reporters in Denmark and after talks with coalition members, sounded upbeat about working through tensions with Ankara.

“Our intent is to work with the Turks, alongside one another, to take Raqqa down, and we’re going to sort it out and we’ll figure out how we’re going to do it,” Mattis said.

Mattis called Turkish Defense Minister Fikri Isik on Tuesday, the Pentagon said. It was unclear how Isik responded but the Pentagon said that both “affirmed their support for peace and stability in both Iraq and Syria.”

The decision to arm the Syrian Kurds will likely cast a shadow over Erdogan’s visit to Washington, policy experts said.

“There have been bad episodes in the relationship between the United States and Turkey, but this one is serious because it gets to the heart of Turkish security priorities,” said Bulent Aliriza, director of the Turkey project at the Center for Strategic and International Studies in Washington.

“You’ve now got a question mark over the U.S.-Turkish security relationship that is pretty serious,” Aliriza said.

Ankara had long argued that Washington should switch support for the planned assault on Raqqa from the Kurdish YPG militia to Syrian rebels Turkey has trained and led against Islamic State for the past year.

But the U.S. administration was skeptical that the Turkish-backed force was large enough or sufficiently trained.

White appeared to allude to that conclusion when she said: “The SDF, partnered with enabling support from U.S. and coalition forces, are the only force on the ground that can successfully seize Raqqa in the near future.”

“The Raqqa campaign is running in parallel with the international coalition against terrorism. It’s natural that they would provide weapons” to the SDF and the armed groups fighting as part of it, Muslim said.

In a sign of recent tensions, Turkish warplanes carried out air strikes against Kurdish YPG fighters in northeastern Syria and Iraq’s Sinjar region late last month, killing less than 30 fighters, according to one estimate.

The United States has played down Turkish accusations of links between the YPG and PKK. Ankara believes the YPG’s advances will fuel anti-Kurdish sentiment in predominantly Arab parts of Syria such as Raqqa, and threaten Syria’s territorial integrity.