What Are The Treatment Options For Lupus: HumSub.TV 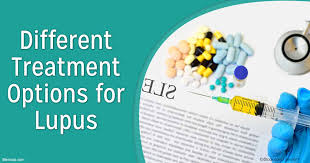 What Are The Treatment Options For Lupus

What Are The Treatment Options For Lupus: Lupus is an autoimmune disorder in which the body’s immune cells attack the body tissues including the organs such as brain, heart, kidney and lungs. Diagnosing Lupus isn’t an easy task as there are many over-lapping symptoms.

Living with Lupus can be debilitating but with proper care and treatment, most of the symptoms can be kept under check. Since Lupus has so many symptoms, treatment of Lupus largely depends on the symptoms that the patient presents with and the intensity of these symptoms.

Commonly known as NSAIDS, these drugs are used in the treatment of commonly-occurring symptoms of Lupus, namely: pain, fever and swelling. Most of the NSAIDS are available over-the-counter but stronger NSAIDS are available only on prescription. It’s not recommended to use NSAIDS for a longer duration of time as prolonged use can lead to ulcers, bleeding and kidney problems.

Corticosteroids work by reducing the immune response in the body. As Lupus is caused by an over-active immune system, corticosteroids are considered as the first-line treatment for reducing pain, tenderness and swelling. Long-term use of corticosteroids is not recommended and the dosage is generally tapered off, once the body starts responding to treatment.

Corticosteroids can be taken in a pill form, topical gel form for skin lesions, in an injection for muscle or joint involvement or intravenously for severe flare-ups.

As the name indicates, this group of drugs is used in the treatment of malaria but some of the drugs from this group, especially hydroxychloroquine, is used in the treatment of flare-ups. This drug is responsible for numbing down the patient’s immune system but it can also damage the retina of the eye at the same time. So patients who are taking hydroxychloroquine are advised to undergo regular eye tests.

Treatment of Lupus also includes a group of drugs known as immuno-suppressants. These drugs are used in alleviating severe symptoms of Lupus. Since this group of drug weakens the immune system, the patient becomes susceptible to infections, cancer and liver damage.