81 all out, Pakistan suffer humiliating defeat against Windies in second Test 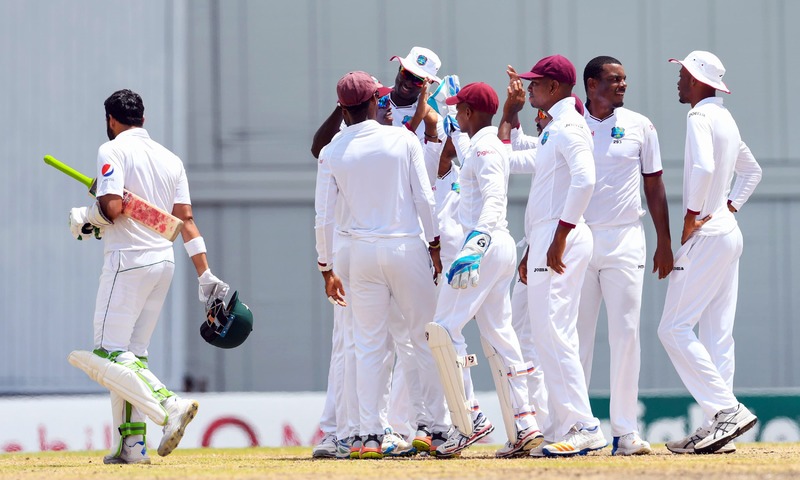 81 all out, Pakistan suffer humiliating defeat against Windies in second Test

81 all out, Pakistan suffer humiliating defeat against Windies in second Test: during the 5th and final day of the 2nd Test match between West Indies and Pakistan at Kensington Oval, Bridgetown, Barbados. Thursday May 04, 2017. Photo by WICB Media/Randy Brooks of Brooks Latouche Photography

Shannon Gabriel produced an outstanding effort of consistently fast bowling to lead the West Indies to a 106-run victory over Pakistan 80 minutes after lunch on the final day of the second Test at Kensington Oval in Barbados on Thursday.

Set a target of 188 after leg-spinner Yasir Shah’s seven for 94 wrapped up the home side’s second innings at 268 at the start of the day, the tourists were never in contention after the pace barrage on a deteriorating pitch led by Gabriel, whose innings figures of five for 11 contributed to Pakistan’s demise for just 81 off 34.4 overs.

It equalled the lowest total ever in a Test innings at the venue set by India, also in a losing effort chasing 120, against the West Indies in 1997 and leaves the series at 1-1 going into the final Test in Dominica starting next Wednesday.

Troubled by injuries and no-balls throughout his comparatively brief career, the burly fast bowler earned the Man of the Match award with overall figures of nine for 92, the third-best by a West Indian against Pakistan.

Only wicketkeeper-batsman Sarfraz Ahmed and fast bowler Mohammad Amir, who contributed 23 each, offered any resistance to Gabriel, Alzarri Joseph (two for 42) and Jason Holder (three for 23), the West Indies captain having the satisfaction of taking the final wicket when Ahmed was caught by Roston Chase on the long-on boundary to trigger the Caribbean side’s celebrations.

“We knew we had a chance once we got a lead over 150,” said Gabriel as he savoured the success. “I just concentrated on bowling the right areas at pace and everything worked out for me and the team.

This was a total team effort.” Gabriel started the rout with the wicket of first innings century-maker Azhar Ali as the opening batsman miscued an attempted pull for Shimron Hetmyer to take a diving catch at midwicket.

Joseph, sharing the new ball with Gabriel, struck in the very next over when Babar Azam flicked at a leg-side delivery for wicketkeeper Shane Dowrich to snare the chance and consign Pakistan’s brightest batting talent to the indignity of a “pair.”

Joseph should have also accounted for Ahmed Shehzad but the opening batsman, who enjoyed generous slices of luck in scoring 70 in the first innings, was missed at first slip edging an attempted drive.

That disappointment was replaced by even more jubilation in the West Indies camp though, as Holder replaced Gabriel and immediately earned the prized scalp of Younis Khan. Adjudged LBW by on-field umpire Richard Kettleborough, Younis challenged the decision only to have it confirmed by the television replays.

With Joseph tiring, Gabriel was recalled into action to replace the gangling Antiguan and the burly Trinidad and Tobago tearaway responded with two critical wickets in the space of three deliveries.

Captain Misbah ul Haq was first ruled “not out” to vociferous appeals but replays following a challenge showed an inside-edge that lobbed to Shai Hope at gully and sent the Pakistan captain back to the pavilion without scoring.

He was joined just a few minutes later by Asad Shafiq when the new batsman edged his second delivery for Powell to take the catch at first slip at the third attempt.

“West Indies deserve all the credit for the way their bowlers performed today but I felt we let the match get away from us by letting them get so many runs in the second innings,” said Misbah.

“Our intention was to bat normally and put away the scoring opportunities but they never really came early enough for us to get going.” Pakistan were in danger of their lowest-ever total when Shehzad and Shadab Khan fell shortly after lunch at 36 for seven. However, Ahmed and Amir took them past the ignominious low of 49 in a 42-run stand that only delayed the inevitable.

Gabriel was brought back into the attack to the break the partnership with the wicket of Amir and completed a five-wicket innings haul when he bowled Shah for the fourth duck of the innings.

It was then left to Holder to finish off the match with the wicket of Ahmed even if it meant denying Gabriel a first ten-wicket match haul in Test cricket.