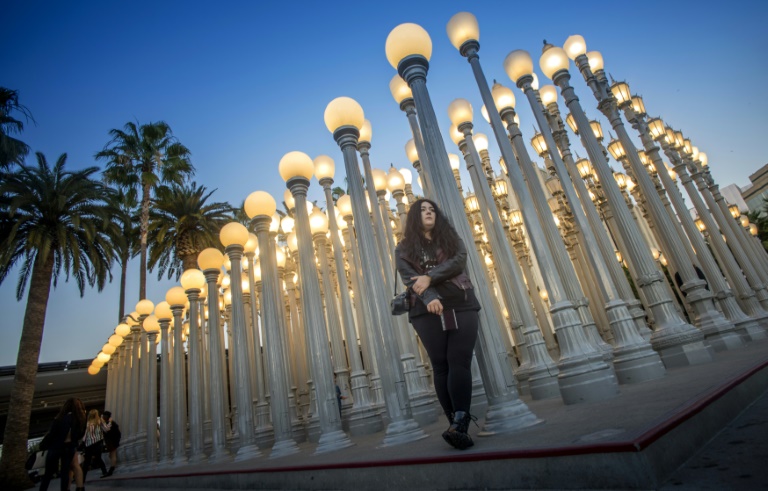 ‘Burden,’ new documentary exploring life of eccentric artist Chris Burden: Having yourself shot, locked up, crucified, dangled from a rope, kicked down stairs or clamped to the floor near electrified water will get you attention — but is it art?
It is a question Los Angeles-based Chris Burden, who died of cancer in 2015, posed through a series of stomach-churning performances that shook the conventional art world in the 1970s, challenging ideas about the limits and nature of modern art.
“I’m not about death and I didn’t want to die, but I wanted to come close,” the late artist jokes in “Burden,” a new documentary exploring the complex, evolving character who became one of the most admired artists of his generation.
On an evening in the fall of 1971, Burden provoked outraged headlines across the world by getting shot on camera by an ex-military friend standing 15 feet (five meters) away with a .22 rifle in Santa Ana, California.
The bullet was supposed to graze his left arm but instead went straight through, leading to a spell in the hospital and a police investigation, although Burden himself insisted that getting shot was “as American as apple pie.”
Directed by first-time documentarians Richard Dewey and Timothy Marrinan, “Burden” mixes grainy footage of his 70s performances with latter day scenes at his Topanga Canyon studio on the outskirts of Los Angeles County.
“It is, I think, the great untold story of the art world, and maybe one of the great untold stories in contemporary pop culture,” Dewey, a writer and filmmaker based in Los Angeles, told a foreign news agency.

Among the talking heads are art dealer Larry Gagosian, who represented Burden, architect Frank Gehry, curator Paul Schimmel and tennis great John McEnroe, a committed Burden collector who describes the artist as “up my alley, a little crazy.”
The one dissenting voice is Brian Sewell, the English art critic who outlived Burden by four months, who takes pleasure in undermining the pursuit of conceptual art.
“Performance art, it’s new, but that doesn’t make it art. It only makes a thing that silly people go to see,” he says, dismissing Burden’s early work as “rubbish.”
Born in Boston, Massachusetts, and brought up in France and Italy, Burden moved to California in 1965 at the age of 19.
He became interested in performance art after enrolling at the University of California Irvine in 1969 and, for his graduate thesis, squeezed himself into a two-foot-cubed locker for five days.
In another piece he had his hands nailed to the roof of a revving VW at Venice beach, and there were numerous other projects involving fire, glass, holding a knife to a woman’s neck and lying motionless and without water for 45 hours.
“I don’t think my pieces always provide answers, they just ask questions. I think that’s what art is about — it doesn’t have a purpose, you see,” he says in a television interview.
Burden ended his marriage to long-suffering wife Barbara in 1974 by publicly announcing an affair with artist Alexis Smith. He moved to New York and began to unravel, bingeing on drugs and running around with a loaded Uzi submachine gun.
– Art’s Evel Knievel –
His stunts had earned him the nickname the “Evel Knievel of the art world,” a designation that came to annoy him, prompting him to quit performance art in the late 70s.
A move to a remote ranch of several acres in Topanga Canyon, where he lived out the rest of his life with his second wife, the sculptor Nancy Rubins, proved the perfect antidote and the start of Burden’s trajectory towards a gentler art form.
“Metropolis II” (2011) — a paean to Angelenos’ love of the automobile — enchants visitors to the Los Angeles County Museum of Art while, outside, “Urban Light” (2008), an assemblage of 202 antique street lamps has become one of LA’s most photographed monuments.
Burden died suddenly of malignant melanoma shortly before filming wrapped, which was not only a huge shock to the filmmakers, but also forced them to rely more on archive footage than they had originally intended.
“There is a tendency when you become very well known for something early in your career to be slightly fixed in people’s minds, in public perception,” said Marrinan.
“I think it was nice that later in his life he had some other pieces that became very well known. Those will leave a legacy as well. He’s certainly been an inspiration to a lot of other generations of artists that have come since.”
“Burden” opens Friday in New York with a national theatrical rollout to follow and is also available on Amazon Video and iTunes.