Did not budge, never sold out as opposition leader: Nisar 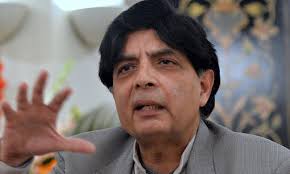 Did not budge, never sold out as opposition leader: Nisar

Did not budge, never sold out as opposition leader: Nisar: Interior Minister Chaudhry Nisar on Saturday claimed that he was offered high-level posts during General (Retd) Musharraf’s tenure and when he did not budge his constituency was divided, but he “did not stumble”.
Addressing political workers in Chauntra, Nisar said that he carried out significant development work in his constituency, ensured electricity provision in every village and “built roads where [previously] donkeys used to walk”. His opponents meanwhile were cosying up with military dictators, Nisar added.

“As an opposition leader, I always spoke the truth, [I] never budged, have never been a sell-out,” said the interior minister.
He said that he set up not one factory or a petrol pump and never did anything which could prove to be shameful for him and the people in his constituency.
Criticising the “politics of abuse”, he said that no sensible Pakistani would support negative and accusatory politics.
“Pakistan needs to be rid of politics of abuse to make it strong,” said Nisar.
He added that turmoil and disorder is not in the interest of the country and democracy.
Later while addressing workers in the Chakri village, Nisar said that Muslims aren’t responsible for terrorism rather they are the most affected by the menace.
He added that change in the country will not come through sit-ins but through motorways and energy projects.