“When You Don’t Know Where You Want To Go, It Does Not Matter Which Road You Take”. PTI Chairman

Mar 9, 2018 “When You Don't Know Where You Want To Go, It Does Not Matter Which Road You Take". PTI Chairman 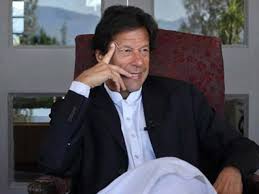 “When You Don’t Know Where You Want To Go, It Does Not Matter Which Road You Take”. PTI Chairman

PTI Chief emphasized on the reforming of senate electoral system which has not been updated by the two major parties PML-N and PPP until now due to their own party interests. They have paved way for horse-trading and have encouraged members to follow a system that enable such acts to take place. The secret balloting itself gives the members chance to sell their votes and not be held accountable. Imran Khan further said that his party is making efforts to change the present system for the promotion of transparency in the electoral system.

Answering the questions of media persons in a joint press conference with Balochistan Chief Minister Mir Abdul Quddus Bizenjo, PTI Chief said that he cannot remove anyone from his party on the basis of rumors against their involvement in horse trading during Senate elections. PTI wants Chairman Senate this time from Balochistan. PTI is working on a concrete strategy to choose Chairman as it is a smaller province and a Chairman from this part of country would help their cause. PTI’s 13 senators will support the Balochistan Chief Minister. At this point his party is sure of the fact that they do not want a Senate chairman from PML-N. Following the concern that if the Senate chairman is from the PML-N, they might endorse laws to defend and protect the Sharif family from the charges of corruption they are facing. He further added that PML-N and PPP have been doging the masses in the name of democracy and have attacked law enforcing agencies and the Supreme Court in the past years.

Balochistan Chief Minister expressed his gratitude to the PTI Chief for his kind support and told the media that he has been contacted by PPP Chairperson as well. He said that he will try to convince Asif Ali Zardari that the Senate chairman should be from Balochistan.