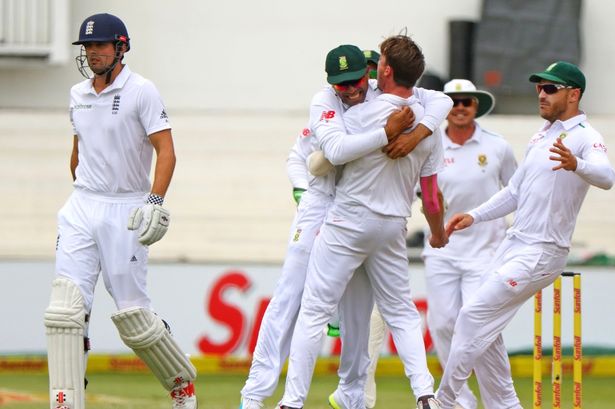 England were dismissed for 205 at Trent Bridge and the tourists have a lead of 205 in the second Test after reaching 75-1 at stumps on day two.

Former England captain Vaughan was critical of their approach during his analysis.

“The England batting has been appalling. Maybe it’s a lack of respect about what the game is,” he said.

They look like they are playing a Twenty20 game. I look at the approach – yes, the ball has done a little bit but it’s not been drastic.

“They have this approach of attack, attack, attack. There is no thought or feeling of seeing off a bowler or wearing a team down.”

Vaughan believes the current crop of England batsmen could learn lessons from the way South Africa have approached batting at Trent Bridge.

“They [England’s batsmen] don’t trust their techniques to stay in long enough,” said the 42-year- old, who captained England to victory in the 2005 Ashes series.

“That’s a concern. England regularly collapse. It’s always when the ball does a little bit.

A lot of England’s players look like they are premeditating their shots. The best way is to watch the ball and react.

“I worry about the mentality of the Test batting because as soon as the things get difficult – it swings around or spins – they play aggressively.”

The selection of Liam Dawson, left, has been a talking point with Michael Vaughan of the belief England should rely on Moeen Ali, right, as their main spinner and select an extra specialist batsman.

Vaughan, who captained England in 51 of his 82 Tests between 1999 and 2008, also claims England’s selectors need a rethink over the balance of the side.

“England are a batter light he added.” You don’t need six bowling options. This is the kind of team you pick after winning Test match after Test match.

“You have three all-rounders in Ben Stokes, Moeen Ali and Jonny Bairstow, so pack the batting. All the players from Joe Root down will give you chances.

“England lost eight Tests last year. They need to pack the batting. They are not good enough or winning enough games to go with that line up.”

Anderson gets his fourth wicket of morning and ends SA innings

England fast bowler James Anderson, who took 5-72 as South Africa crumbled from their overnight 309-6 to 335 all out, refused to criticise his side’s batsmen.

“It was not a great day for us. We did well to bowl them out for under 350 but didn’t get it right with the bat,” said the Lancashire seamer.

“The batters have been fantastic over the previous months and you are going to have days like this, especially with a young side. You just have to keep them to a minimum.

“Joe Root was fantastic and played a great counter attacking knock when we were struggling. The first Test was plain sailing for him as captain but it’s a real test here.”