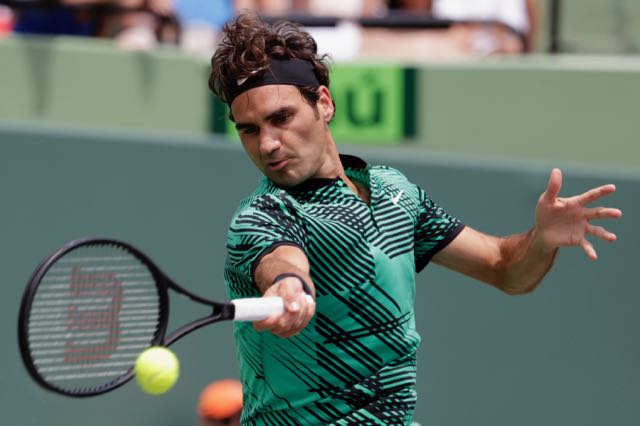 Federer downs Nadal to win Miami Open: HumSub.TV: Roger Federer defeated long-standing rival Rafael Nadal 6-3, 6-4 to win the Miami Open on Sunday and continue his outstanding start to the year.
Since returning from his six month injury lay-off, the 35-year-old Federer has also won the Australian Open and Indian Wells and he heads into a self-imposed break before the French Open as, once again, the dominant presence on the ATP Tour.
Federer has beaten Nadal in all of those events this year and has now won his last four meetings between the pair.
“It’s been a fabulous couple of weeks,” said Federer after his victory before announcing he would take a nearly two month break before the French Open in late May.
“I’m not 24 anymore so things have changed in a big way and I probably won’t play any clay court event except the French,” he said.
Nadal was playing in his fifth Miami final but remains without a win in the Masters series event.
Although Nadal still has a 23-14 advantage in the meetings between the two, dating back to their first match in Miami in 2004, Federer now has a 10-9 lead on hard courts.
The first set was a tight affair with both players having their opportunities to break. But it was not until the eighth game and 10th break point of the set that one of them was able to get ahead.
Nadal could only find the net from a Federer backhand and the Swiss grabbed a 5-3 lead and held the next game to secure the first set.
Federer pinpointed his saving of break points in the first game and at 3-3 as crucial moments in the contest.
“It was totally key,” Federer said. “He looked good from the get-go. He was playing big tennis, stepping in and doing all the right things.
“A bit more luck on his side and the wrong decisions by me at that moment and it could have turned very quickly. It was a very intense first set.”
There has always been a marked contrast between Federer and Nadal’s styles and with time it has become further accentuated.
Nadal was working hard in the 83 degrees afternoon heat, thrusting himself into his shots while the elegant Federer’s poise appeared almost casual.

The second set took an almost identical path, albeit with fewer openings to break for both players until Federer again pounced, to grab a 5-4 lead when Nadal went long returning a fine backhand.
“Maybe if you didn’t see the match and just saw the score you might think it was some sort of straightforward match with a couple of breaks. But that is not the full story,” Federer said.
“He had his chances in the first and the second it was close and I think on the big points today I was just maybe a little bit better … it just fell that way.,” added the Swiss, who showed some signs of tiredness after his gruelling three-set win over Nick Kyrgios in Friday’s semi-final.
“I was more in fight-mode today, just trying to stay afloat. Physically and emotionally it has been a draining week, I think I did very well,” he said.
Nadal was left to stomach a third defeat in three finals so far this year following a loss to Sam Querrey in Acapulco and Federer in Australia. But he said he felt in good form heading into the clay season, where he has enjoyed so much of his success.
“I think I am close to what I need to be. I am at a very high level of tennis and I believe I am ready to win titles,” he said.
“I’m playing enough well to fight for everything I think. I have good hopes that I’m going to be ready for Monte Carlo. Always when I am playing that well, on clay always helps a little bit more for me.
“I am very excited about playing back on clay again,” he said.