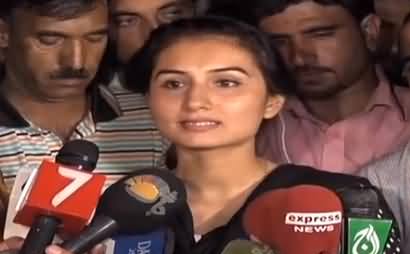 FIA officials manhandle reporter for filming under-arrest Hijazi’s protocol: A female reporter was manhandled on Friday after she tried to record on camera the VIP protocol being provided by the Federal Investigation Agency (FIA) to arrested Chairman Securities and Exchange Commission of Pakistan (SECP) Zafar Hijazi.

The lady reporter of Channel 24, Saba Majeed was manhandled and verbally abused after she drew out her mobile phone and took a couple of pictures of Zafar Hijazi, who was brought to Pakistan Institute of Medical Sciences hospital.

The journalist claims to have seen the assistant director FIA pressing Hijazi’s legs with his both hands.

On seeing her holding her phone in hand, some FIA officials in civil dress forcibly made her delete the pictures and shoved her by holding her arm, she said.

The reporter also claimed that Hijazi’s son also used foul language against her.

When one colleague journalist of Saba, Irfan Malik, tried to intervene, he was also badly thrashed.

It is pertinent here to mention that FIA arrested Chairman SECP today after Special Judge Central Tahir Mehmood refused his plea for bail extension in a case pertaining to record tampering of the Sharif family’s companies.