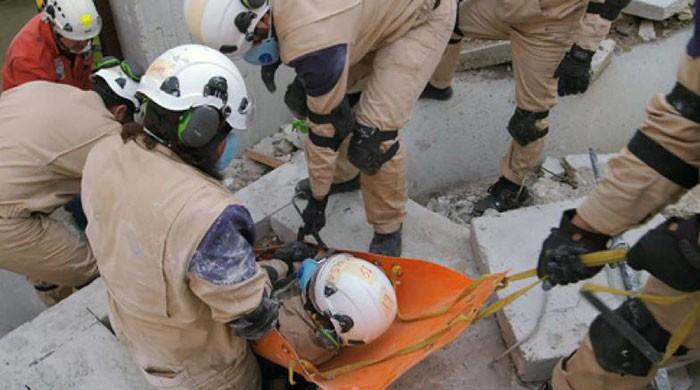 A film about Syria´s White Helmets — rescuers who risk their lives to help save civilians caught in the country’s devastating war — took home the Oscar for best documentary short on Sunday.
The Netflix-produced film, called simply “The White Helmets,” was directed by Orlando von Einsiedel, and bested another short about the Syrian conflict, “Watani: My Homeland.”
But members of the group including the cinematographer who shot much of the footage, Khaled Khatib, were not allowed to enter the United States for the Oscars.
Group members said on Twitter that they had waited for three days at the airport but were not permitted to board a flight.
The US Customs and Border Protection service said only that they did not have valid documents.
The ordeal comes as US President Donald Trump sharply curtails visas for Syrians as well as citizens of a number of other Muslim-majority countries.
Raed Saleh, leader of the rescue group, also was not able to attend but said in a statement that the White Helmets had saved the lives of more than 82,000 civilians.
“I invite anyone here who hears me to work on the side of life, to stop the bloodshed in Syria and around the world,” he said in a statement read by the director.
“It´s very easy for these guys to feel forgotten. This war has been going on for six years. If everyone could just stand up and remind them that we all care, (then) this war ends as quickly as possible.”
Khatib tweeted: “While we follow the Oscars, the Syrian regime has launched chlorine gas attacks in Harasta, injuring civilians.”
The White Helmets emerged in 2013, working to rescue civilians in rebel-held areas during the nearly six-year war.
Before fighting broke out, the volunteers had everyday jobs — bakers, painters and even students. Since 2013, the group says it has attracted more than 3,000 volunteers.
It is named for the distinctive white hard hats worn by its volunteers and has gained international renown for its daring rescues, often filmed and circulated on social media.
International support:
The group’s motto, “To save one life is to save all of humanity,” is drawn from a verse of the Quran, although the rescuers insist they treat all victims, regardless of religion.
The White Helmets were nominated for the 2016 Nobel Peace Prize and garnered international support for their candidacy, though they ultimately lost out.
Their detractors, mostly supporters of President Bashar al-Assad´s government, accuse them of being tools of their international donors.
But others have hailed the group´s volunteers as “real life heroes.”
Syria´s conflict started in 2011 with the brutal repression of anti-government protests and has since spiralled into a complex war, killing more than 310,000 people and displacing over half the country´s population.
The group is funded by several countries including the United States, Britain, Germany, Japan and The Netherlands. It also receives individual donations used to buy equipment, like their white hard hats, which cost about $145 each.
“The documentary took a lot of effort to make and we’ve been working on it for a long time,” Saleh told AFP ahead of the Oscars.
“People who are featured in the film have since died. There’s equipment that you see that has been destroyed.”