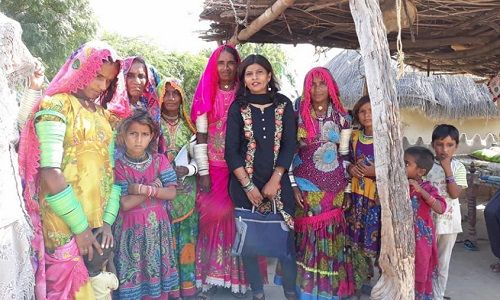 First Hindu Dalit Woman Senator Krishna Kumar Kohli: Karishna Kumar Kohli is from Nagarparkar village in Thar of Sindh province. Thar, also known as the Great Indian Desert, is a large arid region in the northwestern part of the Indian subcontinent that covers an area of 200,000 km2 and forms a natural boundary between India and Pakistan. It is the world’s 18th largest desert.

Krishna Kumar was born to a farmer family living in Thar in 1979. As a child she had to live in a prison as a bonded labor with her family for three years. After the release she got married at the age of 16 and started studying that ended up with her earning a post graduate degree in Sociology. She started her career as a social activist working with her brother Veerji Kohli who is a prominent human rights activist, a PPP leader and the elected Chairman of a Union Council from Nangarparker. They both actively worked for the rights of the marginalized communities of Thar. Karishna works involve women’s rights, bonded labor, and sexual harassment at the workplace.

She was nominated for a minority Senate seat from the Sindh Assembly by the Chairman Pakistan People’s Party PPP Bilawal Bhutto Zardari last month. The election that took place this Saturday on 3rd March 2018 observed the victory of Karishna Kumar Kohli.

The number of non-Muslims elected by the opposition party is now 6, the highest minority representation in the upper house in the history of our country with Kohli becoming a Senator. Before her, the Senate of Pakistan has had only one female Hindu member, Ratna Bhagwandas Chawla from the PPP. Chawla represented the province of Sindh from 2006 to 2012. However Karishna is the first-ever Hindu Dalit woman to be elected to the upper house of Pakistan’s parliament. She aims to work to empower women of her area and maintains that marginalized sections of Pakistani society are given their due rights. In India, Dalits are at the bottom of the Hindu caste system and despite laws to protect them, they still face widespread discrimination.