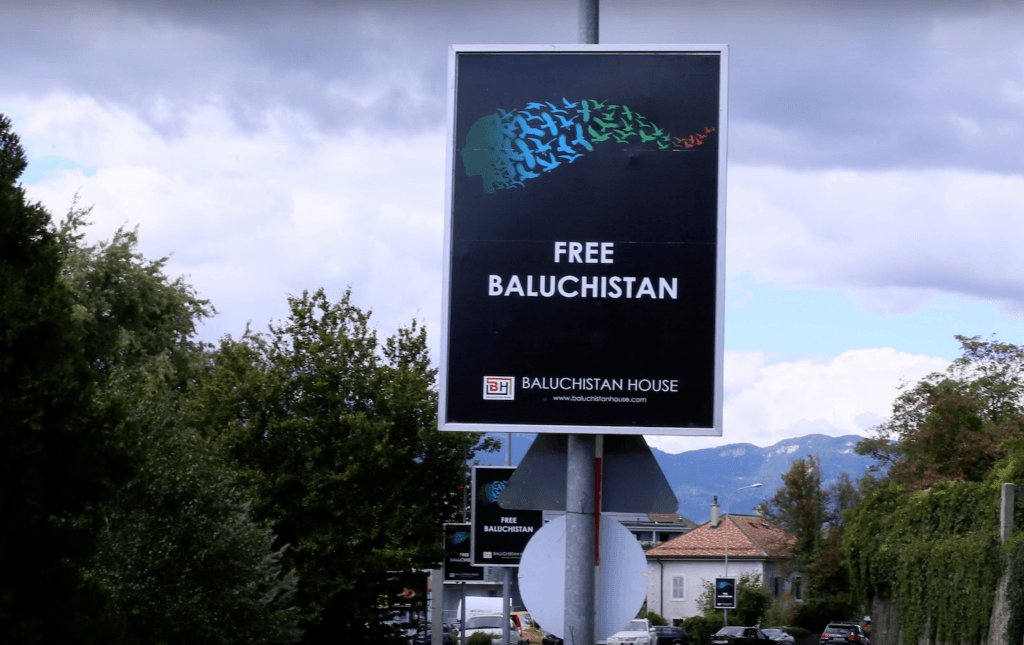 Diplomatic relations between Pakistan and Switzerland are on a knife-edge over an expensive multi-faceted campaign in Geneva targeting Pakistan.

It was witnessed and filmed the anti-Pakistan blitz being run on billboards, trams, buses, rickshaws, websites, and an army of paid volunteers dedicated to running this campaign to malign the country at a time when the 36th session of the UNHRC is underway.

An investigation by this reporter establishes that the Indian mission in Geneva is controlling anti-Pakistan activities and the local Swiss administration has been paid heavy amounts in commercial deals for these campaigns across its public transport, road networks, and private business venues.

Anti-Pakistan posters have appeared on dozens of billboards across the UN Human Rights Council (UNHRC) building in central Geneva in almost a square mile, sponsored by an organization called “Baluchistan House”.

It had been revealed exclusively on a show last year how European and African students and asylum seekers were paid daily wages to hold anti-Pakistan demonstrations outside the UNHRC building by an influential European NGO operating from Brussels.

The anti-Pakistan posters have been decorated on local trams running around the UNHRC building, and buses with routes leading to and around the UN buildings.

Ambassador Farukh Amil, the permanent representative of Pakistan to the United Nations (UN), has written to the Swiss authorities to take action and Pakistan’s Foreign Office on Monday summoned to the Foreign Office Switzerland’s Ambassador-designate Thomas Kolly to condemn the anti-Pakistan posters. Pakistan told the Swiss envoy that activities on its soil were against “Pakistan’s sovereignty and territorial integrity, in contravention of the UN Charter and international law”.

Ambassador Amil told Swiss authorities in his letter that “it is quite conceivable that local city authorities received certain revenue fee for display of these posters,” stressing that the posters were “a flagrant attack on [the] sovereignty and territorial integrity of Pakistan”.

“The use of Swiss soil by terrorists and violent secessionists for nefarious designs against Pakistan and its 200 million people is totally unacceptable,” said the ambassador, demanding that the incident be “fully investigated with a view to blocking its recurrence in the future”.

The ambassador also expressed hope that the Swiss authorities would “proceed against the local accomplices of the BLA and deal with those individual/companies”.

This correspondent has learnt after making inquiries at the local government council, that the ‘Baluchistan House’ has signed “commercial contracts” with the local city government as well as advertising companies to ‘service’ the campaign, and that any cancelation of the campaign could result in legal claims.

This correspondent drove around the city on the route of the posters and spotted more than two dozen billboards in areas where the diplomatic community and international delegates normally reside during the yearly sessions of the UNHRC. The carefully placed posters were both in static and rolling format and light was shone on them at night.

Just outside the UNHRC headquarters and under and around the iconic ‘Broken Chair’, over a dozen cycle-rickshaws or taxi-bikes were spotted decorated in similar anti-Pakistan posters sponsored by a mystery organisation calling itself the European Organisation for Pakistani Minorities (EOPM). These rickshaws go in circles around the ‘Broken Chair’ and nearby fountains which are frequented by international delegates and tourists all day long. All across the roads, around 6 rickshaws were seen for two days going around the area and publicising the anti-Pakistan slogans. When asked if they knew anything about the organisers, the drivers said they were hired for 500 franc each and were only doing their jobs. They said a company had hired their services for three weeks with instructions to provide free rides to tourists in the taxi-bikes. The same bikes also advertised a conference on Pakistani minorities on the 24th, 25th, and 26th at a nearby five-star hotel. A local music band has been hired which performs daily near the ‘Broken Chair’ on Pakistani minorities but no organiser or supporter can be seen around at any time.

A separate standee campaign carrying slogans against Pakistan with a focus on minorities has also been rolled out by the group calling itself the EOPM and Pakistan Human Rights Organisation. These standees were manned by two European teenagers. When asked if they had anything to do with this campaign, they said they were brought over from a local university to do the six hours shift and were paid 350 francs each. They said they offer their services for such purposes to anyone who pays them in cash. These standees carry slogans against violence on women and acid attacks but the organsiation sponsoring these standees is dubious.

A seasoned campaigner, who has been active at the UNHRC for over a decade, told on condition of anonymity that the overall worth of the entire anti-Pakistan campaign is not less than 2 million Swiss franc alone. He said the operation had been carefully planned for months and then rolled out as soon as the UNHRC session started. He said he had witnessed that around five vehicles carrying volunteers and campaign material roaming around the UNHRC headquarters, ensuring that the standees and banners are delivered on time every day and picked up when the session is closed. He said these vehicles were being managed by the local Indian mission in Geneva and its officials were seen providing guidance and help to the paid European workers.

Posters carrying anti-Pakistan posters have also been plastered outside the local trams and buses. It is understood that just one poster contract for a month on a lamppost display costs between 4 and 5 thousand francs.