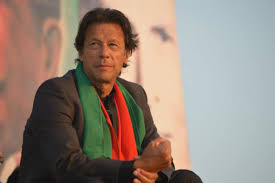 The changes in the Electoral Reforms Bill 2017 on Friday were strongly criticized by the Chairman of Pakistan Tehreek-e-Insaaf Imran Khan Niazi. He further added that the PML-N is destroying the last vestiges of ethics and morality by removing a clause in the bill which prevented disqualified individuals from heading a political party.

The criticism by Khan came after the Senate today passed the Electoral Reforms Bill 2017.

The PTI chairman further alleged that the steps are being taken by the PML-N in order to rejuvenate the former prime minister Nawaz Sharif politically.

He added that the steps are being taken after Nawaz was found “guilty of corruption, money laundering, tax evasion and forgery”.

The upper house passed a bill earlier on Friday in a session which was chaired by Raza Rabbani, however, due to lack of attendance, an amendment suggested by PPP’s Aitzaz Ahsan was rejected.

An amendment in the clause 203 of the bill had been suggested by the PPP, which had said that any individual who is not qualified to become a member of the parliament, should not be eligible to become a party’s chairperson either.

The bill also states that any parliamentarian could only be disqualified for a period of five years, a condition which directly effects Nawaz.

Moreover, it states that ECP will be an independent and autonomous body, which will formulate its own law and party funding details will be available online and restricts the caretaker government from making any policy decisions.

Nawaz was disqualified from holding public office by the Supreme Court under Article 62 (1)(f) of the Constitution in the Panama Papers case verdict.

Announcing its verdict, the five-member bench unanimously disqualified Nawaz for failing to disclose his un-withdrawn receivables constituting assets from UAE-based Capital FZE in his nomination papers for the 2013 General Election, stating that this meant he was not ‘honest’ and ‘truthful’, as per the Constitution.

In the verdict, all five judges ruled to send references against Nawaz Sharif, his children Maryam, Hussain and Hasan, son-in-law Captain (retd) Safdar and Ishaq Dar to an accountability court.

The court also ordered the National Accountability Bureau (NAB) to file a reference against the accused in an accountability court in six weeks and directed for the trial to be wrapped up within six months.