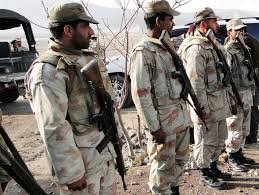 According to Inter Services Public Relations, five militants were apprehended while six hideouts destroyed across Balochistan.

Operations were carried on in different areas of the province including Kahan, Loralai and Kuchlak by FC Balochistan under Operation Radd-ul-Fasaad.

Weapons were also recovered from the arrested militants, according to the army.