Kashmir’s ex-freedom fighters, families live stateless in their own home 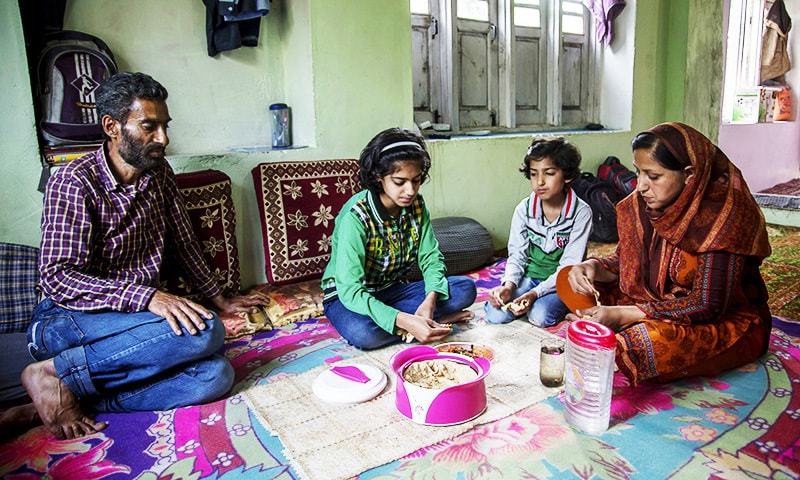 After former fighter Syed Bashir Bukhari gave up the rebellion against Indian rule in his home territory of Kashmir, he faced trouble.
His family was denied Indian citizenship after returning from the Pakistan-administrated side of the disputed Himalayan territory. His teenage son was refused school admission, and his Pakistan-Kashmiri wife and five daughters felt ostracised.
After two years of struggle, he’d had enough. On a hot summer day in 2014, Bukhari set himself on fire in the main square of the western village of Kreeri and died the next day in a hospital, according to his wife, Safeena Bashir.
“We were cheated,” Safeena said about the family’s decision to accept an Indian deal promising citizenship and reintegration in exchange for giving up the fight against Indian rule.

Though her son, now 21, is supporting the family as a coppersmith and her daughters are now in school, Safeena wants to return to the Pakistani side where she felt welcome. “This is no life here.”
The family is part of the latest generation caught up in a violent conflict that has dominated Kashmiri life since 1947, when India and Pakistan gained independence from the British Empire and almost immediately began fighting over rival claims to this mountain territory.
The two countries have fought two wars over their claims to Kashmir since, and each now administers a part of it separated by a militarised Line of Control (LoC) that snakes through valleys and across mountains.
Bukhari was among tens of thousands of young Kashmiris who in 1989 rose up against Indian rule and launched a bloody rebellion, demanding Kashmir’s independence or its merger with Pakistan. Thousands of the militants were killed in clashes with Indian troops or in the Indian crackdown, or were arrested during raids.
In 2010, after the rebellion had largely been crushed, India rolled out a rehabilitation programme inviting former fighters home, provided they renounce militancy. Some 377 men did, bringing another 864 family members with them, according to state records.
But the former fighters were never granted any promised benefits and their families were denied Indian citizenship. They cannot get travel documents or hold government jobs. Admission to school is not guaranteed, as it is for documented Kashmiris. They can’t open a bank account or legally apply for a cooking gas connection. Buying property is out of the question.
The one document they can get without a problem is an ID that allows them to vote in Indian elections. “For us, everything here happens by ‘jugaad,’” said former fighter Shabir Ahmed Dar, using the colloquial Indian term for a cheap and improvised fix.
He spoke to The Associated Press at the hardware shop where he helps with the bookkeeping, doing work that must be paid in cash, in the region’s main city of Srinagar. His daughter had been in the first year of medical school in the Pakistani city of Karachi but was barred from continuing her studies on the Indian side after the family returned.

The Indian government says the former fighters forfeited their rights by re-entering the country through Nepal or Bangladesh and not through three designated points along the India-Pakistan border or through the international airport in New Delhi.
Officials would not explain why they needed the returnees to go through one of the four border points.
Some former militants said Indian soldiers had blocked them at those designated border points. Others said that because Pakistan was never on board with the rehabilitation deal, the Pakistanis did not facilitate crossings.
They now accuse India of being dishonest.
“This is plain cheating,” Ahmed Dar said. “If we came back via non-approved routes, why didn’t they stop us or repatriate us” back to Pakistan?
Authorities acknowledge their hardship, but say their hands are tied.
“There are issues, but we can only execute the government orders,” said S P Vaid, Kashmir’s director-general of police.
The region’s highest elected official also reaffirmed that the former fighters can’t be fully rehabilitated because they came back the wrong way.

“Since these youth have not returned via approved routes, they are not entitled to any benefit available under the policy of 2010,” Chief Minister Mehbooba Mufti said earlier this year while speaking in the state assembly.
Mufti has asked India’s home minister to include the Nepal route, which most former fighters had used, on the list of formal entry points.
Former fighters who have returned are also under constant police surveillance, adding to their stress, according to 10 former rebels interviewed by the AP.
Some within the local Indian Kashmiri society view them as traitors, or deserters from the cause of Kashmir’s struggle against Indian rule.
The cold reception they’ve received, both from civilians and from authorities, has discouraged many other fighters from returning.
“We were lured to return to abject humiliation and deprivation,” said former fighter Sonaullah Dar, now living in a single room with his Pakistani wife and two daughters since returning in 2013. He keeps their Pakistani birth certificates carefully wrapped in a plastic bag. Four years later, he is still spending his days running between government offices hoping to one day secure legitimate papers for India.

Some former fighters say they regret bringing wives to live in poverty, unable to see their families or where they grew up.
Tariq Ahmed Khan said he made a mistake going to Pakistan for the rebellion. But “returning was a graver mistake and robbed our children of a better future.” Some have even tried going back to the Pakistani side.
A year after Syed Munir-ul Hassan Qadri brought his wife and three children to the Indian side, he attempted to take them and four other families back over the highly militarised Line of Control to the Pakistani side of Kashmir in 2013. But they were detained by Indian soldiers near the de facto border.
He became an advocate for the dignity and rights of former rebels. He was in the hospital at the bedside of one dying Pakistani woman named Saira Bano who, distraught at not being able to visit her family in Pakistan, had set herself on fire in 2014, a year after arriving with her ex-fighter husband and two daughters.
“I vividly remember her last words,” Qadri said. “Take me back. I can’t live here.”