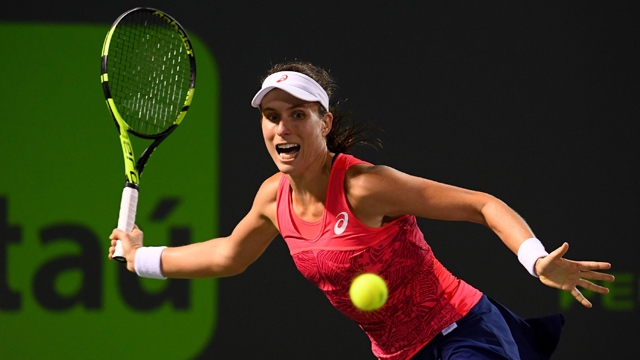 The clock had ticked past midnight and most of the crowd had long since departed before Konta eventually put away the 36-year-old Williams after more than two hours of attrition on the Crandon Park hardcourt.

The 10th seed will play Caroline Wozniacki in Saturday’s final after the Danish 12th seed won an even longer semi-final, 5-7 6-1 6-1 against second seed Karolina Pliskova to kick off the day’s action.

“Thanks to everyone who stayed. Good morning by the way,” Konta joked in a courtside interview at an almost empty stadium after the pair traded eight breaks of serve in a baseline slugfest. “To be honest it was so incredibly close, so many back-and-forths in every point of every game. I feel very fortunate I was able to take advantage of a couple more opportunities than maybe her. It really could have gone either way.”

The final will be Konta’s second of the season after the world number 11 won the Sydney International in January, with the Briton meeting Wozniacki for a second time following her third round win over the Dane at this year’s Australian Open.

Konta predicted a marathon final against Wozniacki, who capitalised on her renowned endurance and made fewer unforced errors in wearing down Pliskova, despite frittering away three set points in the opener.

The result exacted a measure of revenge for Wozniacki, who was beaten by the big-serving Czech in the Doha final last month.

“Fitness is something I’m working really hard on every day. It’s a huge part of my game,” Wozniacki, who completed the 2014 New York Marathon in less than three-and-a-half hours, said in a courtside interview. “It was definitely a mental grind. Having two or three set points in that first set and ending up losing it is kind of depressing, but I got a good start to the second set and that got me fired up and I just kept playing.”

Wozniacki, a part-time south Florida resident, said she considered the Miami Open her local tournament. “It’s extremely special,” she said of reaching her first Miami final. “Having a place here and training here in the off season, it’s a home court.”