May 13, 2018 Main Features of Sindh Budget Presented By CM Sindh 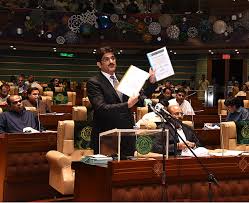 Main Features of the budget are as follows:

CM Sindh added in his speech that the decision on 9th NFC award is causing huge economic loss to the provinces, especially the province of Sindh because its revenue collection is much higher as compared to other provinces and urged the federal government to announce NFC award soon so that further loss to our province could be avoided.