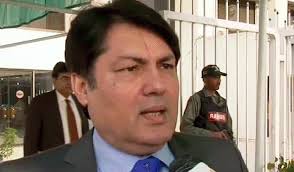 Former federal minister of Pervez Musharraf’s cabinet and MQM-Pakistan’s (MQM-P) Barrister Saif has said that former prime minister Nawaz Sharif’s disqualification on the basis of Iqama is on “very weak grounds” and “justice does not seem to have been done”.

In an interview, Saif said that he has never been a supporter of Nawaz Sharif and has openly criticised him throughout but the “disqualification verdict by the Supreme Court looks weak and lacks strong judicial grounds”.

“I have never supported Nawaz Sharif. I have been a defender of Pervez Musharraf and that’s known to all but in the case of Nawaz Sharif, it looks clear to everyone that justice had not been done to Nawaz Sharif. Justice and fair trial were not the consideration throughout the trial. I have said it throughout that the way this case has been dealt was inappropriate. At the outset, the Supreme Court could have referred this case to the National Accountability Bureau (NAB) but the honourable judges said that NAB is a dead institution and unable to perform its duties and now after the disqualification of Nawaz Sharif, the same case has been sent to the same NAB that was denounced and questions raised on its credibility,” said Saif, who has practiced law for over a decade.

He added that the court should not have included two officials of Pakistan armed forces into the Panama JIT.

“That was wrong. An impression was created from the start as if the establishment is behind the cases against Nawaz Sharif. The court should have instead utilized civilian agencies for the investigation. The disqualification verdict looks biased, this decision wasn’t about right or wrong at any stage. The case sent to NAB is based on JIT’s observations.”

The barrister said that even if a decision was made to get rid of Nawaz Sharif, it could have been done through a NAB trial and not on the basis of Iqama, which has created a strong narrative in favour of Nawaz Sharif.

“The former prime minister has been disqualified on the basis of receivable salary and not on the basis of received salary. I think this has given the people a chance to say that big decisions are being made on the basis of personal likes and dislikes. With utmost respect to the courts, I will submit that if these are the kind of decisions made, then objections will arise on the streets, in public rallies and all over. A neutral and just decision should have been made. The judges should have told Nawaz Sharif that we have evidence against you, that we are sending your case to NAB and that you should step down on moral grounds. But Iqama disqualification has given political advantage to Nawaz Sharif.”

Barrister Saif, who has represented Pervez Musharraf in legal cases, said it’s unfortunate that legal issues are being politicised.

He added that justice has not been done in the case of Benazir Bhutto’s murder. “Many legal points have been ignored. Those who confessed to have been part of the Benazir Bhutto’s murder plot have been acquitted. Five Taliban [militants] admitted meeting Baitullah Mehsud and receiving funds, but they have been left off the hook. Two respected senior officers have been convicted for 17 years for having nothing to do with Benazir’s murder and both have a great police service track record. Pervez Musharraf has been brought into this case on political grounds. Even in this case, an impression has been created as if the establishment was behind it and that’s wrong. Those involved should be punished at any cost but through the correct judicial process.”

Barrister Saif, who is on a short visit to London, said that MQM-Pakistan has completely distanced itself from MQM-London after the August 22 speech last year.

“What happened on 22nd August last year is unfortunate. I know it for a fact that MQM-Pakistan has no contact and relation with MQM-London and that’s final. MQM, under the leadership of Farooq Sattar, is united. There has been no division of MQM in Pakistan. As far as the politics of Pak Sarzameen Party are concerned, it is in view of everyone, it has no credibility and no following.”