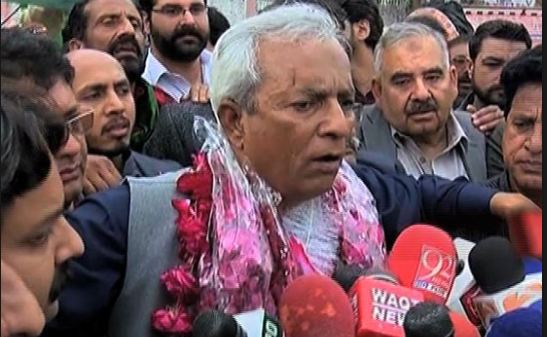 Nehal Hashmi said that he was a victim of revenge as his appeal against the verdict had still not been heard even after his sentence has ended. He was speaking to the media after being released from Adiala Jail in Rawalpindi. He said,”This is the height of oppression”. In another comment he said, “This is the state of this country.”

He said that prisons were filled with 75-year-old men, people who needed by-pass surgery and those who were being targeted by National Accountability Bureau”. He called for action against NAB which he asserted, “the most corrupt institution in the country”.

He repeated his earlier words against the judiciary, “Who are you to hold me accountable? And who are you anyway? I stand by what I said earlier”. On being asked if he was ashamed of his statement that landed him in jail, Nehal Hashmi declared that only a “fraud, thief or a person who took undue advantage of power would be embarrassed”. He said he was proud of his statements and act. He claimed that his speech was not out of constitutional boundary.

Nehal Hashmi was sent to jail for contempt of court by the Supreme Court of Pakistan. He was accused of imposing threats to SC judges and members of the JIT that had been formed by the Supreme Court of Pakistan. When he was summoned by the SC, he presented his plea for pardon for the contempt. His request for pardon was rejected by the SC. He was not only sentenced to imprisonment but was also ordered to relieve of his duties as Senator. He was also declared ineligible for public bearing seat for the next five years after the verdict of SC.