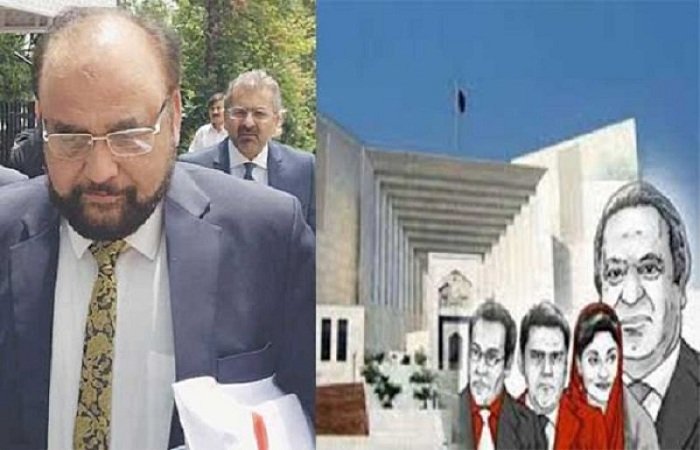 The move comes after investigators said his family had failed to account for the source of its financial assets.

The probe began when the Panama Papers leaks linked his children to offshore companies used to buy London flats.

He says the properties in London were acquired legitimately and that he personally does not own them.

But the issue is turning into a major challenge to him. Opposition groups accuse his family of using their political influence to amass wealth by unlawful means and are calling on him to resign.

So far Mr Sharif has refused, calling the investigators’ report a compilation of “allegations and assumptions”. His decision to stay in power was endorsed by the federal cabinet last week.

Hundreds of security personnel have been deployed around the Supreme Court, parts of which have also been fenced with barbed wire.

The Joint Investigation Team (JIT), set up in April, says it has found “significant gaps/disparity among the known and declared sources of income and the wealth” accumulated by Mr Sharif and his family.

It accuses Mr Sharif of concealing assets, overstating the wealth of his father with the aim of justifying his family’s wealth, and of not reflecting in his wealth statement an “exorbitant hike” in his family’s wealth during his first decade in power (1985-93).

It accuses his heir-apparent, daughter Maryam Sharif, of being the “beneficial owner” of offshore firms through which the London flats were acquired, and of forging documents to show she was a trustee for her brother, the real owner.

This allegation is based on a copy of a trust deed which she signed in February 2006. The JIT says the document was printed in Calibri font, which was not commercially available until January 2007.

The existence of the flats and the offshore companies linked to them was disclosed in the leak of 11 million documents held by the Panama-based law firm Mossack Fonseca.

The family said that the money for the flats, as well as the family’s businesses in the UK and the Gulf region, came from the sale of their UAE-based Gulf Steel Mills.

The mill was set up by PM Sharif’s father, the late Mian Mohammad Sharif, in the early 1970s, and he later invested the proceeds from its sale in a Qatar-based business.

The Sharif family have produced a letter from former Qatari Prime Minister Prince Hammad bin Jassim al-Thani explaining the money trail. He was not available to be interviewed by the JIT.

But the JIT says it found no evidence of a money trail leading from Pakistan through Dubai and Qatar to the London flats.

The JIT report has divided the nation – something very apparent in media coverage.

Audiences hooked to any of the pro-government TV channels would conclude that the JIT report was a pack of lies, but debates on pro-opposition channels leave no doubt in the minds of their viewers that they think Mr Sharif and his family are associated with corruption.

The report deals with complex issues of international finance, involving a labyrinth of financial regulations from a number of states and regulatory bodies.

Therefore, while much of what it states may be grounded in reality, experts have pointed out instances where the JIT appears to have either covered up for its lack of access or understanding, or has included opinions that do not have a sound basis.

Questions have also been raised over the Supreme Court’s decision that the two military intelligence services, the MI and the ISI, would contribute one representative each to the six-member JIT, which should ideally consist of financial experts only.

Also, the Supreme Court’s decision to let the ISI exclusively arrange secretarial services to the JIT has not gone down well with those who believe this service has been actively involved in political management of Pakistan’s ruling superstructure since the 1980s.

Many suspect the ISI is meddling ahead of elections due in 2018 so it can retain its influence over the political establishment.

The Supreme Court finds that there is not enough evidence to show that the prime minister has been involved in any wrongdoing, and dismisses the case

A disqualification would mean that Mr Sharif would be out of politics for life, as required under the “honest and sagacious” provision of the constitution. His daughter and political heir would face the same prospect.

It is not clear how the situation will be handled by the Supreme Court, which is itself under tremendous pressure.

Creating the JIT to look into the prime minister’s wealth was an unprecedented move. The JIT is not a child of the constitution or the executive, but a child of the Supreme Court.

As such, few consider it likely that the court would reject the JIT’s report entirely.

If disqualified, the prime minister is likely to announce a successor – possibly his brother Shahbaz, who is chief minister of Punjab – and let the government complete its term.

In any other event, analysts expect him to stay on and, if he must, to go down fighting.