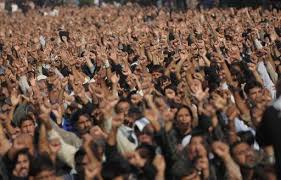 Pakistan’s total population has been recorded at 207.774 million, according to the provisional summary results of the sixth population and housing census.

The summary was presented at Council of Common Interests on Friday. “CCI took note of the position and after detailed discussion allowed the Ministry of Statistics to disseminate the provisional results and directed the PBS to expedite the compilation of the final results,” according to the press release.

According to the census, about 32 million households are present in the country with the number of males recorded at 106 million, females at 101 million and the transgender population at 10,418.

Unsurprisingly, Punjab was the most densely populated province with 110 million people, followed by Sindh with 47 million, KP with 30 million, Balochistan with 12 million, FATA with 5 million and Islamabad Capital Territory (ICT) with 2 million.

The highest average annual growth rate from 1998 to 2017 was recorded in rural areas of Islamabad Capital Territory at 6.95pc.

The lowest average annual growth rate was recorded in the rural population of Punjab at 1.81pc.

The Provisional summary results show an overall increase in population by 57pc over the year 1998, while the population increased by 146.6pc since 1981-census.

However, there has been a decline in the population growth rate at the national level and in Punjab and Sindh Provinces, while an increase has been observed in the provinces of KP, Balochistan and FATA.

As per the provisional results, the urban population shows a growing trend with 36.38pc of the population living in urban areas.

On the other hand, a significant decrease has been observed in the percentage of urban population in ICT which gone down from 65.72pc to 50.58pc, indicating that growth occurred in the rural areas of Islamabad.

Amongst the provinces, Sindh is the most urbanised province, where 52.02pc population live in urban areas.