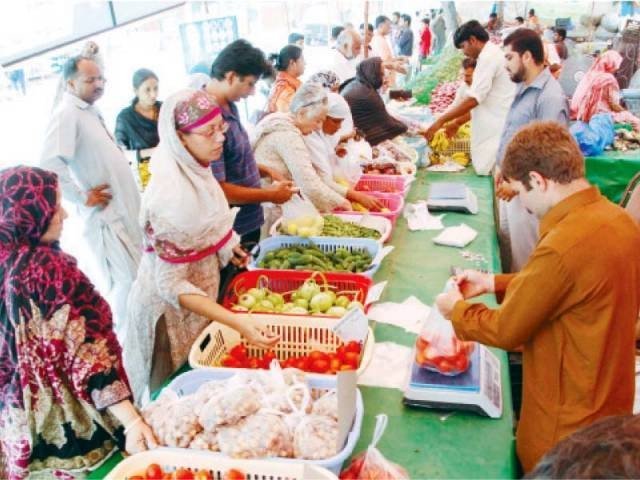 District administration is monitoring the Ramazan bazaars and open markets. Traders would not be allowed to fleece the customers and sale low quality products.

Items including in the Ramazan Markets are

The local government in the garrison city set up five special markets in the city of Rawalpindi. There are total of 16 Ramazan markets all over in Rawalpindi.

Municipal Officer Regulation (MOR) Shahzad Gohar said that these bazaars are set up by the Rawalpindi Municipal Corporation (MCR).

These markets are located at the

The government is ensuring the availability of daily-use commodities at these markets, especially during the holy month of Ramazan.

Earlier, in this regard, special directives have also been issued to prominently display rate lists of all commodities which will be available at the stalls. The lists should have the phone numbers of those tasked with supervising affairs at the respective bazaars so that if any stall owner overcharges, a complaint can be made. The lists will also contain numbers for emergency services.

The Ramazan Markets aims to provide quality items to buyers at reasonable rates, the MOR said, adding that apart from daily-use items, fresh vegetables and fruits would also be available at subsidised rates in the market.

Each bazaar would be having its own control room with segregated waiting areas for men and women.

Punjab government has also set up 306 Ramazan Bazaars in Lahore to provide relief to the public on items of daily use decided in a meeting of the cabinet’s price control committee.

All Ramazan bazaars will remain operational from May 14th till June 15th 2018.

Fixed Rates By Govt Not Followed

It is reported however in regular markets despite the claims of the provincial government and city administration, profiteering continues unchecked in markets in almost all the localities of the city during this year’s Ramazan.

Vegetables and fruits are being sold at rates much higher than those fixed by the Commissioner Office. In the open market, vendors are selling goods at prices about 40% to 50% higher than the notified rates.