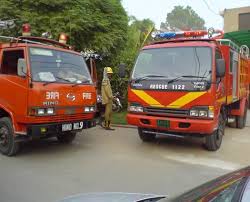 On Monday January 8, 2018 two people were burnt to death in Lahore. One of the victims was identified as Bilal and the other was a minor girl.

The incident took place late night on Sunday January 7 near Guru Mangat Road, a stationed truck caught fire. The victim Bilal was stuck inside the truck. The fire engulfed the entire vehicle within seconds and he was burnt to death.

According to the police, it was considered as an accident.