US candy makers join together to reduce calories 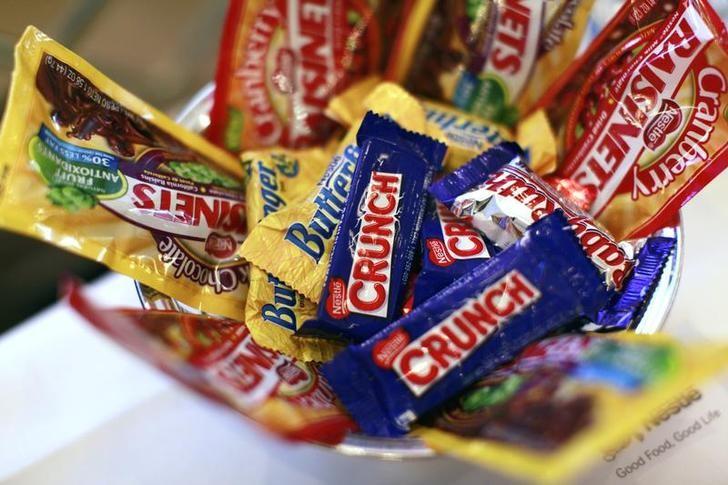 US candy makers join together to reduce calories

US candy makers join together to reduce calories: Five major chocolate and candy companies announced a joint commitment on Thursday to reduce calories in many sweets sold on the U.S. market, a rare example of cooperation in a competitive industry and testament to rising consumer distaste for sugar.

The United States is the world’s largest consumer of sweeteners and obesity, diabetes and heart disease rank among leading health concerns in the country.

The U.S. Food and Drug Administration overhauled packaged foods labelling last year and required all manufacturers to list added sugars on labels by 2018.

Companies including Mars Chocolate North America LLC, Nestle USA, WM Wrigley Jr Co and Lindt & Spruengli, said they had committed to ensuring that half of their individually wrapped products sold in the United States contain no more than 200 calories within the next five years.

“There’s going to be less sugar and fewer calories in the food that consumers are going to be eating,” said Larry Soler, president and chief executive for Partnership for a Healthier America (PHA).

The commitment by the group of companies, which includes clearly stating the calorie count on 90 percent of their best-selling products, will be monitored for five years by PHA and the Hudson Institute, a Washington-based think tank.

“They want to make sure that they meet the consumers where the consumers want to be met,” said John Downs, National Confectioners Association president and chief executive.

The companies, which include the makers of M&M’s and Jaw Busters, could cut calories by reducing package sizing or reformulating recipes, as well as launching new products.

Confectionery pricing was not part of the commitment, Soler said.

Nestle, the maker of Butterfinger and Crunch, said in December it had devised a new technology that has the potential to reduce sugar in some of its confectionery products by up to 40 percent without affecting the taste.

At present, over 60 percent of the companies’ individually wrapped products contain less than 250 calories each.

Soda companies, such as Coca-Cola and PepsiCo Inc, have also targeted consumers who want lower calorie drinks by offering products in smaller cans. The firms make larger margins on those sales than for sodas sold in traditional-sized cans.

Consumers have already cut down on candy. The volume of U.S. retail sales of packaged confectionery declined 1.9 percent to 2.47 million tonnes in 2016 from 2011, while sales of savoury snacks rose 9.5 percent to 4.26 million tonnes, Euromonitor International data shows.

Euromonitor forecasts that confectionery sales will rise to 2.5 million tonnes by 2021, however.

Retailers are adapting to changing consumer preferences. CVS Pharmacy, for instance, announced a new store design last month to drive growth in sales of what it described as “healthier choices” in candy, snacks and other foods.

Hershey Co was not part of Thursday’s commitment by candy makers to cut calories, but it did make a similar announcement of its own in April.

At the time, Hershey said that by 2022, it would make 50 percent of its individually wrapped standard and king sized confectionary products with 200 calories or less. It also committed to state the number of calories on the front of its packaging for these products.