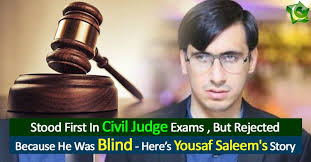 Yousaf Saleem Pakistan’s First Blind Judge: Yousuf Saleem was once stopped from becoming a judge due to visual impairment. After it was highlighted in the media, Chief Justice Supreme Court Mian Saqib Nisar took notice of the case and directed the chief justice of the Lahore High Court (LHC) to analyze the case stating that a person could be a judge even if he is blind, as long as he meets all other qualifications.

Following the order, Lahore High Court (LHC) Chief Justice and its relevant committee reconsidered him as a candidate and recommended him for the position of the civil judge. So for the first time in the history of Pakistan’s judicial set up, a visually-challenged young man, who is also a gold medalist, is set to be appointed Pakistan’s first-ever blind judge.

Saleem received a letter of recommendation by the Lahore High Court last week which read: “Honorable Examination Committee for Recruitment of District Judiciary and Lahore High Court Establishment has recommended you for appointment as Civil Judge-cum-Magistrate.”

Yousaf who belongs from Lahore is the son of a charted accountant. He has four sisters and two of them are also visually impaired.

Recommendation was the first step towards the realization of his dream to become a judge. “There would be some legal formalities in coming weeks before the official appointment,” he said.

Yousaf Saleem is a gold medalist of the Punjab University in LLB (Honors) and had topped the written judiciary exam among 6,500 candidates in 2014. But his impressive academic record only took him to the interview stage for the position of civil judge. He was among 21 successful candidates but was not selected as he was blind.

He expressed gratitude to CJP for taking notice of the situation and the chief justice of LHC and selection committee for reconsidering his case and recommending him as he is confident that he is fully eligible for the position.

One of his sisters, Saima Saleem, is the first blind civil services officer who has served in Pakistan’s UN missions in Geneva and New York. Yousaf is the youngest among siblings.

During the interview, he explained that “it is critical to establish a strong foundation for all children, especially differently abled, on which they can build fulfilling lives.” He shared that his biggest motivation comes from his parents and his teachers. “My school was the first place that gave me confidence to dream big.”

Saleem’s dream is to become a Supreme Court judge and he wishes to serve as the Chief Justice of Pakistan, one day.