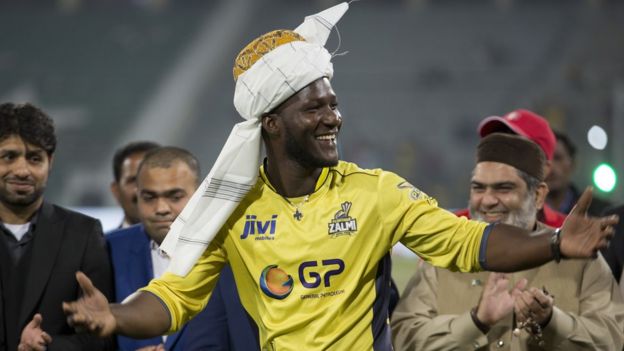 The much-awaited match was played at the Gaddafi Stadium in Lahore amid high security and was witnessed by an enormous crowd of 30,000 that included politicians, International Cricket Council officials, entertainers and general public.

The decision of fielding first did not prove favourable for the Gladiators as the team stumbled while chasing an attainable target of 149 runs. An excellent bowling display by Zalmi bowled out the whole Quetta team for just 90 runs in 16.3 overs without a single six in their entire innings.

It is pertinent to mention here that team Gladiators was playing sans its star international players which crumbled them in getting a start they wanted. Srafaraz Ahmad tries to boost the morale of his team players by striking at a rate of 200 but was soon stumped off by Muhammad Hafeez.

Earlier, the flying start of Zalmi was restricted to 148 runs for six wickets in 20 overs by disciplined bowling of Gladiators’ Rayad Emrit who put a halt to quick addition of runs to 43 in 4.4 overs.

Fall of Kamran Akmal’s wicket after scoring 40 runs of 32 deliveries led to collapse o Zalmi’s middle order, bringing them from 82-1 to 112-6. However, the team was saved by Darren Sammy’s fireworks that posted a respectable total on scoreboard.

The hosting of match earned Pakistan Army and Punjab government commendable appreciation from officials, commentators, players and spectators who declared the playing of the final in Lahore as triumph for Pakistan.