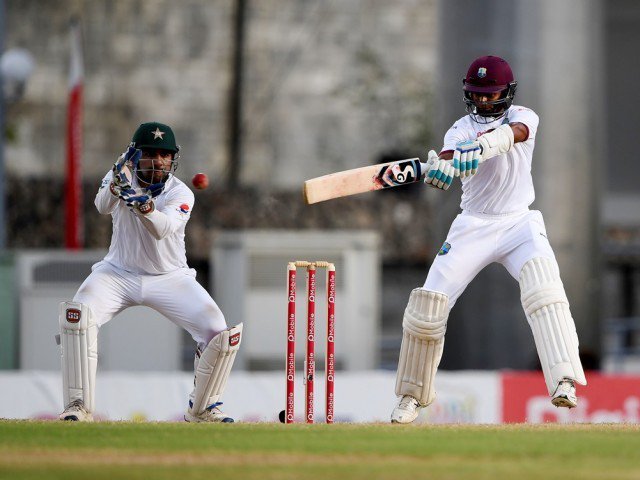 3rd Test: West Indies crawl to 218-5 against Pakistan: West Indies replicated their opponents’ dour batting effort in crawling to 218 for five off 100 overs in reply to Pakistan’s first innings total of 376 at stumps on day three of the third and final Test at Windsor Park in Dominica on Friday.

Leg-spinner Yasir Shah lifted his series-leading wicket tally to 20 with three victims in the morning session but the home side then showed resolve with all-rounder Roston Chase leading the defiance in a topscore of 60 before being forced to retire hurt in the final session.

Struck painfully on the right elbow attempting a pull at Mohammad Amir operating with the second new ball, the lanky right-hander’s departure after 190 minutes at the crease gave Pakistan a measure of optimism which was heightened when Vishaul Singh fell leg-before to Mohammad Abbas to make the score 189 for five.

However captain Jason Holder, despite sustaining a painful blow as well on his left shoulder, held firm with Shane Dowrich and the pair will resume on the fourth morning heartened by the prospect of Chase returning at the fall of the next wicket to continue his innings.

For all of Shah’s perseverance and the efforts of the fast-medium bowlers it was Azhar Ali’s part-time leg-spin which broke a stubborn 55-run fourth-wicket partnership between Chase and Shai Hope in mid-afternoon.

Having batted grittily for almost three hours, Hope mistimed a drive off the very last ball of the post-lunch session to be caught for 29. He was a model of correctness and discipline until his critical error of judgement.

Troubled again by Shah operating round the wicket, Chase was given out on 23, caught at slip by Younis Khan as he swung at the leg-spinner. However the decision of standing umpire Richard Illingworth was overturned on review of the television replays.

There was more frustration for the bowler in his very next over as Asad Shafiq failed to hold on to a fierce square-cut from Hope.

He broke a 43-run opening partnership when Kieran Powell’s miscued heave was well caught by Azhar Ali running in off the boundary.

With Kraigg Brathwaite plodding along in his usual stoic manner at the other end, Shimron Hetmyer sought to seize the initiative only for Shah to bring his enterprise to an end when an original “not out” verdict by presiding umpire Bruce Oxenford for an appeal for a leg-side catch by wicketkeeper Sarfraz Ahmed was overturned on television review.

There was no doubt though to Ahmed’s second dismissal of the morning as Brathwaite, who had grafted his way to 29 off 123 deliveries through three-and-a-half hours, pushed forward to Shah in the last over before the interval and edged a catch high to the wicketkeeper’s right.