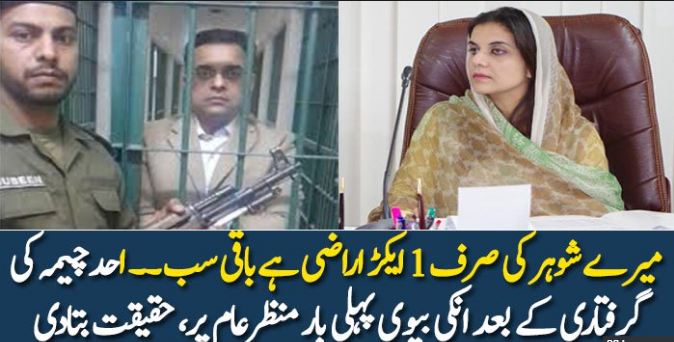 Ahad Cheema Met His Wife: Ahad Cheema, the former Director General Lahore Development Authority, met his wife as it is said by regional office of National Accountability Bureau. Ahad Cheem told his wife that he was not tortured by NAB after his arrest.

Earlier, it was blamed on NAB by the family members of Cheema that he was physically tortured by NAB.

Cheema was arrested last week for alleged misuse of authority in awarding Rs 14 billion in Ashiyana-e-lqbal scheme to Lahore Casa Developers, a joint venture said to be ineligible for the contract.

Another development was also exposed. Medical reports have revealed that Ashiyana Housing Scheme contractor and the owner of Bismillah Engineering Services Shahid Shafiq was not tortured physically and mentally. Allegations were made that Shafiq was tortured by National Accountability Bureau officials. However, the medical reports have revealed that he is both physically and mentally fit. When he was presented in court, he was physically fine and was only suffering from slight depression. He was found under stressed.

Earlier, Shafiq’s wife had alleged that NAB officers had tortured her husband both physically and mentally. She had further requested that a case be filed against the NAB officers by the government.

Shafiq’s arrest apparently came on the information provided by former Director General of Lahore Development Authority Ahad Cheema. The strike by Punjab bureaucracy against Cheema’s arrest was called off on Monday and all offices of the Lahore Secretariat were re-opened. The strike was called off after Punjab Chief Secretary Captain (Retd) Zahid Saeed instructed all officers to work according to the law. He further said the law should be followed to investigate Cheema’s case. The strike was strongly condemned by the political parties chiefly Pakistan Tehreek –i- Insaf and Pakistan Peoples Party.

On the other side, Civil Secretariat, LDA and Punjab Revenue Authority officials are still divided into two groups regarding the protest. It should be kept in mind that after Cheema’s arrest, the civil servants started a protest and also passed a resolution against the NAB action. A high-level delegation of the bureaucracy met Punjab Chief Minister Shehbaz Sharif and presented a charter of demands. The CM Punjab assured that he will discussed the issue with concerned authority.