At least 16 ‘terrorists’ gunned down, several detained under Operation Radd-ul-Fasaad 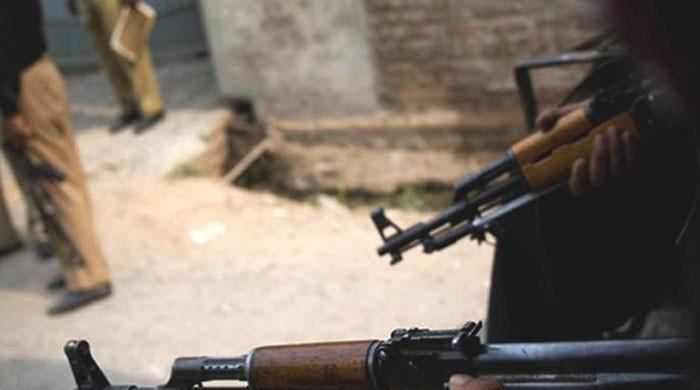 At least 16 ‘terrorists’ gunned down, several detained under Operation Radd-ul-Fasaad

Simultaneous crackdowns conducted by security forces and Counter-Terrorism Department (CTD) across Pakistan under Operation Radd-ul-Fasaad killed at least 10 suspected terrorists on Thursday, including the alleged mastermind of Lahore blast.

Karachi police claimed to kill two ISIL militants in a tip-off raid in Maghopir area on Friday. The suspects had opened fire on policemen, injuring one, following which the retaliatory fire killed both the suspects, Saifullah and Haneef. Weapons and laptops were recovered in the raid, according to Senior Superintendent of Police.

Rangers arrested as many as 50 suspects in Rawalpindi’s Pir Wadhai area on Friday and confiscated wireless internet devices and other possessions of the detainees.

CTD, in a separate incident, intercepted and arrested a suspected terrorist near Ring Road from Achni Khor on Friday when he was transporting explosive material from Khyber Agency to Yakoot.

CTD conducted the raid on a tip-off from intelligence agencies and arrested the terrorist named Naimatullah alias Fidai. The suspect had been shifted to an undisclosed situation after explosives were recovered from him.

Wajihuallah was the mastermind of Lahore blast while Qari Zubair was the coordinator of terror attacks between banned outfits and rival intelligence agencies.

The crackdown was conducted near the PT link canal where a suspected terrorist named Yaseen aliases Imran and Amjad, belonging to banned outfit Lashkar-e-Jhangvi, was killed. Four others manages to escape.

A huge cache of ammunition and explosives was seized in the raid and dead bodies of terrorists were shifted to morgue. Five of killed could not be identified.