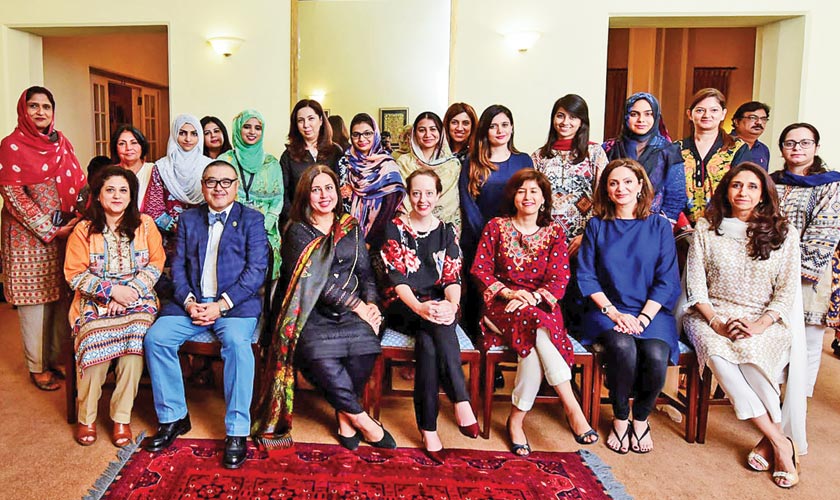 The economic gap is caused by a number of factors, including women being paid almost half of what men receive, working on average 50 minutes a day longer and having a much slimmer chance of reaching senior roles.

The closing ceremony for the programme took place at the British Deputy High Commission in Karachi and was well attended by influential female and male leaders. CEOs of corporations like National Foods, United Bank, Unilever, Standard Chartered, Jazz and Mitsubishi Pakistan amongst others are ‘Elevate Champions’ to build diverse and inclusive organizations where women and men can thrive.

Elin Burns, British Deputy High Commissioner warmly hosted the event and presented the welcome keynote appreciating the work CIRCLE has undertaken to prepare female leaders. CIRCLE, a social enterprise led by Sadaffe Abid, has been set up which aims to advance women’s economic participation and empowerment through innovative entrepreneurship and leadership labs, advocacy campaigns, digital skills and research under their campaign “Elevate”.

Elin said there is an opportunity gap of £23 trillion because of the lack of labor participation of women. She emphasized on the responsibility of being a mentor and ambassador for such programmes, as it is about recognizing that being a CEO gives the power to challenge and inspire in small ways as well as big.

Chairperson Unilever, Shazia Syed and Quartulayen Pervaiz, a female pilot of PIA also shared their journeys and why women empowerment matters on the occasion. In conclusion, Ayesha Tammy Haq, lawyer and broadcast journalist, shared an inspiring story of a girl from Chitral with the help of a small loan through micro-financing; she managed to have an entire building of people working under her.

It is possible that even with limited resources, one can achieve so much more than they can imagine. It is high time to put that untapped potential to use.