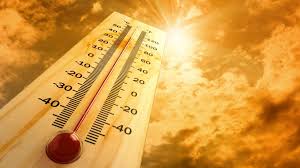 Deadly HeatWave In Karachi: A heat wave has killed 65 people in Pakistan’s southern city of Karachi over the past three days, as per sources, amid fears the death toll could climb as the high temperatures persist.

The heat wave has coincided with power outages and the holy month of Ramadan, when most Muslims do not eat or drink during daylight hours. Temperatures hit 44 degrees Celsius (111 Fahrenheit) this week, local media reported.

Still thousands remained outdoors where they huddled around public taps, wetting towels to cover their heads. The city of more than 15 million is hit by frequent power cuts and has few green spaces.

People living on its streets have little access to shelter or safe drinking water, making them acutely at risk in blistering temperatures. Power outages continued to plunge large areas of Karachi into darkness at both sehri and iftar timings.

Multiple areas in the city were in the dark Tuesday night as residents sat down for their sehri meal. The heat wave coincides with the beginning of Ramadan, when millions of Pakistanis abstain from food and drink from sunrise to sunset.

In June 2015 about 1,200 people died in southern Pakistan during a heatwave, with nearly two-thirds of the victims homeless people.

Faisal Edhi, who runs the Edhi Foundation that operates morgues and an ambulance service in Pakistan’s biggest city, said the deaths occurred mostly in the poor areas of Karachi.

“Sixty-five people have died over the last three days,” Edhi told Reuters. “We have the bodies in our cold storage facilities and their neighborhood doctors have said they died of heatstroke.”

But Sindh province’s Health Secretary Fazlullah Pechuho told the English-language Dawn newspaper that no one has died from heatstroke.

“Only doctors and hospitals can decide whether the cause of death was heatstroke or not. I categorically reject that people have died due to heatstroke in Karachi,” Pechuho was quoted as saying.

The provincial government has assured residents that there would be no repeat of 2015 and was working on ensuring those in need of care receive rapid treatment.

Temperatures are expected to stay above 40 degrees Celsius until Thursday, local media reported.