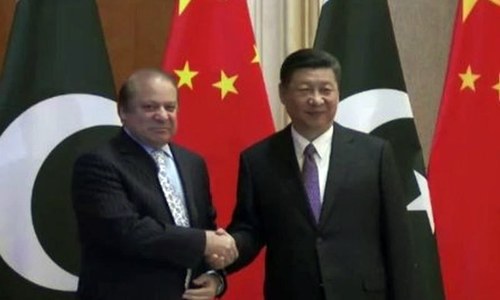 Xi made the remarks in his meeting with Prime Minister Nawaz Sharif, who along with a high-level delegation is in Beijing to attend the Belt and Road Forum, which is focused on boosting regional development through China’s new Silk Road plan.

A Radio Pakistan report said President Xi in his meeting with Sharif expressed satisfaction over the pace of bilateral Sino-Pak ties and iterated his resolve to further strengthen the relationship through increased cooperation in various fields.

Pakistan and China earlier inked a number of agreements aimed at boosting cooperation in various sectors between the two countries, Radio Pakistan reported.

The Memorandums of Understanding (MoUs) were signed on the sidelines of the Belt and Road Forum in the presence of Prime Minister Nawaz Sharif and Chinese Premier Li Keqiang. Federal ministers and the chief ministers of Sindh, Punjab, Khyber Pakhunkhwa and Balochistan were also present on the occasion.

According to Radio Pakistan, the agreements signed by Chinese and Pakistani officials on Saturday include:

Earlier, Sharif held a meeting with the Chinese premier, who welcomed the Pakistani delegation’s participation at the forum, a statement issued by the Prime Minister’s Office said.

Sharif congratulated Premier Li on the organisation of the summit, saying: “Pakistan fully supports China’s vision of the Belt and Road Forum”.

“Pakistan considers China its most valuable friend,” the prime minister said, adding that the participation by chief ministers of all four Pakistani provinces at the forum is an indication that “we are all one for [the success of] the China-Pakistan Economic Corridor”.

He reaffirmed Pakistan’s commitment for the completion of early harvest projects under CPEC.

Delegates will hold a series of sessions on Sunday afternoon to discuss the Silk Road plan in more detail, including trade and finance. China has given few details about attendees.

Leaders from 29 countries will attend the forum in Beijing on May 14-15, an event orchestrated to promote Xi’s vision of expanding links between Asia, Africa and Europe underpinned by billions of dollars in infrastructure investment.

Some Western diplomats have expressed unease about both the summit and the plan as a whole, seeing it as an attempt to promote Chinese influence globally.

China has rejected criticism of the plan and the summit, saying the scheme is open to all, is a win-win and aimed only at promoting prosperity.

In an English-language commentary on Saturday, China’s state-run Xinhua news agency said the new Silk Road, officially called the Belt and Road initiative, would be a boon for developing countries that had been largely neglected by the West.

“As some Western countries move backwards by erecting ‘walls’, China is contriving to build bridges, both literal and metaphorical. These bridges are China’s important offering to the world, and a key route to improving global governance,” it said.