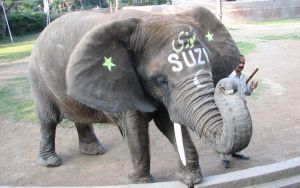 According to reports, zoo administration also has to be blamed for the lack of attention and giving the elephant in the care of inexperienced veterinary doctors.

Officials of the zoo administration said Suzi had been transported to Pakistan in Lahore in 1988 at the age of six.

They added that the female elephant had reached her natural life span limit.

According to reports, the zoo administration had discontinued rides on the elephant several years ago after realising that she could not support the weight on her back.

Officials said Suzi was the most attractive feature at the zoo and a favourite of visitors, especially children.