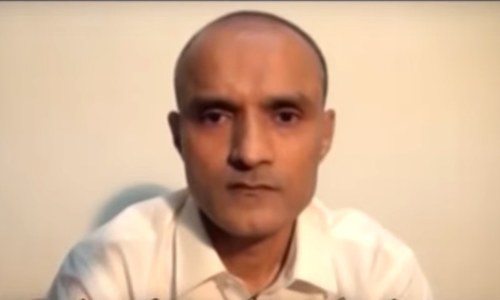 A senior government official told the Senate on Friday that an FIR [First Information Report] against Indian spy Kulbushan Yadav had been registered and the prosecution was preparing a case in this regard.

Addressing the members of Senate, Adviser to the Prime Minister on Foreign Affairs Sartaj Aziz said that the United Nations secretary general had been provided with information regarding the activities of Yadav, an agent of the Indian spy agency Research and Analysis Wing (RAW) who was arrested in March last year from Balochistan. He added that Yadav’s arrest proved that India was fomenting terrorism and unrest in Pakistan.

The official said that a list of questions had been sent to India over the presence of Yadav in Pakistan, which would assist in court proceedings. He said that the dossier was not the only way forward, and the real thing was to work on prosecution of the Indian officer.
During the session, Senator Sehar Kamran asked about the delay in the formation of a dossier on the Indian spy. To this, the Foreign Office submitted a written reply which stated that the dossier contains sensitive information and input from various department and required some time to finalize.
Pakistan People’s Party Senator Aitzaz Ahsan questioned as to why the prime minister refrains from naming Kulbushan Yadav. “The day he takes his name I will donate Rs 50,000 rupees to an organization for the welfare of the blind,” he said.
Aziz replied that the PM will name the Indian spy at the right time.