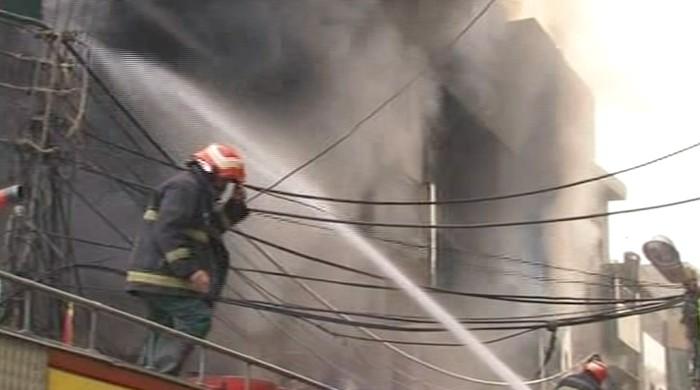 Rescue teams reached the spot on time and rushed the injured to nearby hospital, adding that the fire flared up at 2 am in Guddi Bazar at Ganpat Road that later spread to warehouses and seven buildings in its vicinity.

Around 10 fire engines of rescue service 1122 and local district administration are taking part in fire-fighting operation and have extinguished the fire after eight hours. The cooling process may take two or more hours.

Power supply has been suspended in the area by the local administration to avoid any unforeseen accident.

Rescue workers added that observation suggests short circuiting to be the reason behind eruption of fire. Lahore Deputy Commissioner stated that all shops on the ground floor remained safe.

The owners of the plaza have allegedly claimed a loss of goods worth a million rupees.