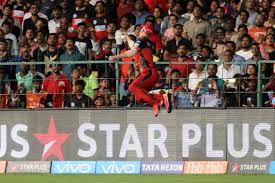 In a closely fought season, only two sides – Sunrisers Hyderabad and Chennai Super Kings – have earned qualification to the final four, leaving the remaining two spots up for grabs. After thrashing Rajasthan Royals at home in their last encounter, KKR now have 14 points and are at the third position in the table. Their next match is against the table-toppers Sunrisers Hyderabad. They just need to beat Sunrisers Hyderabad to make it to the top 4.

South African cricket star AB de Villiers had the crowds at the Chinnaswamy Stadium in Bengaluru, India roaring as he pulled off a stunning catch against Alex Hales in the 8th over of Sunrisers Hyderabad versus Royal Challengers Bangalore (RCB) match held on Thursday.

The match that was off to a rough start for RCB had a turning point when AB de Villiers leaped on one leg and caught the ball with his right hand like a pro.

Since then, the South-African player is being hailed by the cricket community as ‘Spiderman’. Even cricket stalwart Virat Kohli couldn’t stop himself from lauding him.

Kohli said about ABD’s catch, “That was Spiderman stuff. You don’t do that as normal human beings. I thought it was going for a six but he pulled it off. He can do freakish things but I am used to it now. His fielding I am pretty used to now.”

Even other international players joined on in expressing astonishment at de Villiers’s catch.